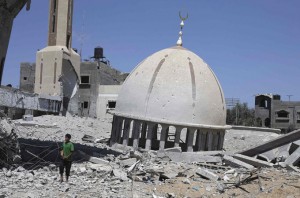 A leader of the Palestinian group Hamas has said there will not be a renewal of the Gaza ceasefire that ends on Friday unless Israel meets some of its demands.

Ismael Radwan told Reporter: “The truce will not be renewed; it cannot be renewed without real achievements. As we speak, no response has been received to Hamas’s demands, which means there is no breakthrough in this respect.”

A 72-hour deal brokered by Egypt took effect on Tuesday, bringing relief to residents in the Gaza Strip after four weeks of fighting and heavy bombardment.

Israeli media has reported that Israel was offering to extend the ceasefire for another 72 hours unconditionally.

There were also reports in Egyptian media that the truce could be extended but few details were coming out of Cairo on any progress made with the talks.

“It really goes to show how difficult it is for both sides to reach an agreement,” our correspondent said.

While Israel is calling for demilitarisation of the Gaza Strip, Hamas wants the Israeli blockade on Gaza lifted, and the release of Palestinian prisoners.

On Wednesday, Israel’s Prime Minister Benjamin Netanyahu defended his country’s military actions during the four-week-long assault, blaming Hamas for the fatalities in Gaza.

In a news conference in West Jerusalem, Netanyahu said: “Israel deeply regrets every civilian casualties. The people of Gaza are not our enemy, our enemy is Hamas”.

“Every civilian casualty is a tragedy, a tragedy of Hamas’s own making.”

“It was justified. It was proportionate,” he said.

At least 1,875 Palestinians, most of them civilians, were killed in the assault, while 67 people, including 64 soldiers, died on the Israeli side

Netanyahu’s comments came as UN Secretary-General Ban Ki-moon said the deaths in Gaza “have shocked and shamed the world”.

The UN chief has also called for investigation into bombardment of UN facilities in Gaza.

“Attacks against UN premises, along with other suspected breaches of international law, must be swiftly investigated,” he said.

The UN has called on all parties in the Middle East to find a lasting peaceful solution to the conflict in Gaza.

In a special meeting of the UN General Assembly convened at the request of Arab countries, Ban said: “The senseless cycle of suffering in Gaza and the West Bank, as well as in Israel, must end.

Ban called for an end to rocket fire from Gaza and weapons smuggling as well as lifting an Israeli-Egyptian blockade on Gaza and bringing the besieged territory back under one Palestinian government.

In Gaza, where about a half-million people have been displaced by a month of bloodshed, some residents have left UN shelters during the ceasefire to trek back to neighbourhoods where whole blocks have been destroyed by Israeli shelling and the smell of decomposing bodies fills the air.

Meanwhile, streets in towns in southern Israel, which had been under daily rocket fire from the Gaza Strip, have again come to life with children playing.