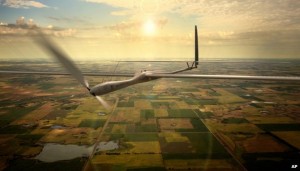 Google said the acquisition was intended to help the firm’s efforts to expand internet access.

Titan Aerospace, which is building two types of solar-powered drones that can fly for years, says it expects “initial commercial operations” by 2015.

The firm, which has about 20 employees, will continue to be based in Moriarty, New Mexico.

“It’s still early days, but atmospheric satellites could help bring internet access to millions of people, and help solve other problems, including disaster relief and environmental damage like deforestation,” Google said in a statement.

“It’s why we’re so excited to welcome Titan Aerospace to the Google family.”

The two firms are competing to be able to use cutting-edge technology, like drones and high-altitude balloons, to deliver internet to more of the world’s population.