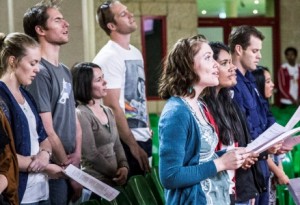 One of the scriptural ceremony held in St Patrick’s Catholic Church In Blacktown, Sydney. Large number of families, men,women & children took part in the ceremony with greater interest & esteem.

The message given was clear about Christian’s believe On Good Friday, the entire Church fixes her gaze on the Cross at Calvary. Each member of the Church tries to understand at what cost Christ has won the redemption. In the solemn ceremonies of Good Friday, in the Adoration of the Cross, in the chanting of the ‘Reproaches’, in the reading of the Passion, and in receiving the pre-consecrated Host, Christians unite their selves to their Savior, and they contemplate their own death to sin in the Death of the Lord

The liturgical observance of this day of Christ’s suffering, crucifixion and death evidently has been in existence from the earliest days of the Church. No Mass is celebrated on this day, but the service of Good Friday is called the Mass of the Pre sanctified

The omission of the prayer of consecration deepens the sense of loss because Mass throughout the year reminds that of the Lord’s triumph over death, the source of joy and blessing. The desolate quality of the rites of this day reminds of Christ’s humiliation and suffering during his Passion. We can see that the parts of the Good Friday service correspond to the divisions of Mass.

Ceremony also attended by Jews & Muslims representatives of community. Church also included Muslim People in their prayers who share with them honour for Jesus & Mary & a belief in the resurrection of Jesus…Muslim representative lead the church in their prayer as follows,

Down the Ages you have sent prophets

To call us back to you.

The Prophet Mohammed taught his followers

To submit your will….

Grant us healing for past wrongs.

Remove from our Midst Fanatics,

Teach us to live in peace as sons & daughters

Of our common Father Abraham…

Ceremony concluded with the distribution of ‘Bread Of Life’ as in John 6:35, 48: Jesus said unto them, ‘I am the bread of life: he that comes to me shall never hunger. I am that bread of life.’

All members left the church with silence & few remained inside participating in silent prayers.