THE HAGUE: Olympic champions Germany kick-started their campaign to reclaim the hockey World Cup title with a 4-0 drubbing of South Africa at the Kyocera Stadium on Sunday.

Germany, beaten by Australia in the final in 2010 at New Delhi, were winners of successive World Cup titles in 2002 and 2006. 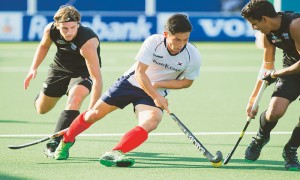 South Africa kept the German strikers at bay until they conceded a penalty stroke in the 27th minute that was converted by Christopher Zeller.

The lead was doubled by Jan Philipp Rabente just before half-time.

Germany remained in control in the second half with goals from Mats Grambusch and Oliver Korn, sealing the deserved victory as they took all points in their first Pool ‘B’ outing.

The top two teams from each pool will qualify for the semi-finals.On Saturday, the opening games of Pool ‘A’ were played and England opened their campaign with a 1-1 draw after Alastair Brogdon’s sixth-minute goal for England was cancelled out by Eduard Tubau.

In another Pool ‘A’ match, India’s shaky defence conceded a goal 15 seconds from the hooter to go down 2-3 against Belgium.