srael has hit the Gaza Strip with missiles and artillery for the first time in three days, while Palestinian fighters launched a barrage of rockets at Israel, just hours after a ceasefire between the two sides expired. 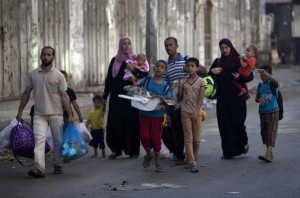 An Israeli air strike killed a 10-year-old child in Gaza City on Friday, the first death reported since a 72-hour truce expired at 8am (05:00 GMT), Palestinian medics said. At least six other people were wounded.

The Israeli army said more than 30 rockets were fired into southern Israel after the truce ended. Three of the rockets were intercepted by the Iron Dome missile defence system. Two Israelis were wounded, the army said.

The ceasefire expired as no progress was made in the Egyptian-mediated talks aimed at finding a durable solution to the month-long fighting.

Talks among the main Palestinian factions in Cairo were still ongoing, sources told reporters, just after they announced their refusal to extend the 72-hour truce.

Representative from Palestinian factions, including from Hamas, the Palestine Liberation Organisation and the Islamic Jihad, had been meeting in Cairo for talks with Egyptian mediators on extending the ceasefire.

“All the Palestinian factions, including Hamas, have agreed not to renew the ceasefire because [Israel] is refusing to accommodate our demands, but negotiations continue in Cairo,” Hamas spokesman Fawzi Barhum told the AFP news agency.

Israel, whose representatives were also present for the talks in the Egyptian capital, had said it was ready to “indefinitely” extend the ceasefire.

The Palestinian side laid out a number of demands, starting with the lifting of Israel’s eight-year blockade on Gaza. They also want the release of around 125 key prisoners held in Israeli jails.

A spokesman for Hamas’s armed wing, Qassam Brigades, warned late on Thursday that fighting would resume if their demands were not met, first and foremost to open a sea port to the blockaded Palestinian enclave.

“If there is an agreement, it will be possible to extend the truce, but if there is not, we will ask the delegation to withdraw from the talks,” a spokesman using the nom-de-guerre Abu Obeida said in a televised address.

Despite the withdrawal of all its troops from Gaza by the time the three-day truce began early on Tuesday, Israel has retained forces along the border, ready to respond to any resumption of fighting.

Four weeks of military assault on Gaza has claimed the lives of at least 1,893 Palestinians, according to Gaza officials. UN figures indicate that 73 percent of the Palestinian victims were civilians. Of that number, at least 429 were children.

On the Israeli side, three civilians were killed by rockets fired from Gaza while at least 64 soldiers died in the fighting.

Ayman Taha, a former spokesman for Hamas – the son of one of the group’s founders – was found dead on Thursday in a neighbourhood of Gaza City that was heavily bombed by Israel, the movement said.

Speaking in Jerusalem after a visit to Gaza, International Committee of the Red Cross president Peter Maurer said he was “deeply distressed and shocked” at the impact of violence, saying the scale of the civilian losses must not happen again.

He also suggested there may have been violations of international humanitarian law.