The new school year will be delayed indefinitely in Gaza, as more than 380,000 Palestinians remain displaced.

Shujayea, Gaza City – Ahmed al-Arqan, 54, sits under the roof of what used to be his family’s home: The three-story house, where he and his five brothers lived with their families in the eastern Shujayea neighbourhood of Gaza City, was almost entirely destroyed by an Israeli missile shot from an F16 warplane.

A math teacher, al-Arqan was meant to return to school in less than a week. But as violence has resumed in Gaza after the breakdown of ceasefire talks between Israeli and Palestinian negotiators in Cairo, the school year has been postponed indefinitely in the besieged Palestinian territory. 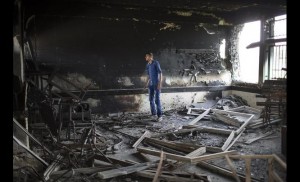 “Teachers and students need at least three weeks before returning to school,” al-Arqan told media. “The authorities should also remove some parts of the curriculum to make it lighter for the children.”

The Israeli assault on Gaza, which started on July 8, has to date killed over 2,000 Palestinians, including at least 459 children, and injured another 10,300, according to the Palestinian health ministry in Gaza. Sixty-four Israeli soldiers and three Israeli civilians have also been killed.

In Gaza, electricity has been cut off for at least 12 hours each day, the UN reported, after Israeli tank shells hit the strip’s sole power plant on July 29, while damage to local water infrastructure is now estimated to cost about $34m.

Israeli fire also hit three UN-run schools acting as shelters in the northern Gaza Strip and in the southern border town of Rafah during attacks in August, killing at least 46 people.

“I’m psychologically exhausted because the war is not yet over… We did not relax during the summer holiday. Our clothes and belongings remain under the rubble… We escaped with the clothes we were wearing and our ID cards,” al-Arqan explained.

At least 231 schools have been damaged during the Israeli offensive, while approximately 380,000 Palestinians in Gaza are currently seeking shelter at UN or government-run schools, or with host families.

“Teachers need a vacation each year so that they can teach well… This year, our trip was with death and destruction,” said al-Arqan, as he surveyed the debris around his home.

The school year was meant to begin on August 24, but with the ongoing violence, the start date has been delayed indefinitely, according to Ziad Thabet, the deputy minister of education in Gaza. Thabet told media that students would be given two weeks from whenever the fighting ends before they are asked to come back to school.

Like all Palestinians in Gaza, young students have struggled under Israeli bombardment. “We did not enjoy our summer holiday… it [did not feel like a holiday],” said Mohammed Abu Shehada, an eighth grader, who has been staying with his family at the Al-Remal preparatory school in Gaza City for more than a month.

Sitting atop a desk placed outside the classroom that his family shares with 30 other people, Shehada added: “We need a day off in exchange for every day we spent living here at the school… I don’t want to leave the school as a displaced person and return next week as a student.”

During the most recent five-day ceasefire, Shehada would go to his neighbourhood of Tofah, in east Gaza City, to console his friend, Ziad, who lost several members of his family in an air strike on their home. “Among them was Ziad’s brother, who I knew,” Shehada said.

Two months after Israel’s last major military offensive in Gaza in November 2012, the United Nations’ agency for Palestinian refugees (UNRWA) found that the PTSD rate rose by 100 percent, and that 42 percent of patients were under the age of nine. UNICEF also reported that 91 percent of children surveyed in Gaza had trouble sleeping, 85 percent couldn’t concentrate, and 82 percent reported feelings of anger and symptoms of mental strain.

According to Fadel Abu Heen, professor of psychology at Al Aqsa University in Gaza, the first week of school will likely be “a week of painful memories and grief for both students and teachers”. Abu Heen explained that qualified psychologists are needed to provide support sessions to “get effective results” for teachers and students. “Otherwise, they will be useless,” he said.

Al-Arqan, who lost a nephew in the Israeli attacks, was also struggling psychologically, as he recalled seeing a badly injured man carrying his dead daughter between his arms and bleeding on the ground on the night of July 20, when he and thousands of others fled from Shujayea.

“His face was unrecognisable… I ask myself: ‘What if he was someone I know? What If I was in his position?'” said al-Arqan, explaining that he could not stop to evacuate the man “because we were running and shells were falling behind us”.

Thabet, the deputy minister of education, told media that the ministry planned to institute sessions with psychologists to support local teachers during their first week back to school, and that it intended to institute similar programmes for children.

He said that the ministry would be facing hard choices concerning the evacuees who have lost their homes and currently live in shelters at these schools. “Frankly, we can’t drive out any family that lost its home, but at the same time we have to start the new year,” Thabet said.

The ministry, Thabet added, can allocate two schools in each city for displaced families to live in for two or three months as a partial solution. “It’s the government’s job to find a more lasting solution.”

Meanwhile, for teacher al-Arqan, seeing the schools transformed into shelters is painful. “Schools are known for education. They are the cornerstone of the society,” he said. “But turning them into shelters with insufficient water supplies and a lack of privacy humiliates people.”