Army and air force troops are working to rescue thousands of people stranded across Indian-administered Kashmir, according to Indian officials, while across the border the Pakistani army says it is helping administration officials move people to safer places. 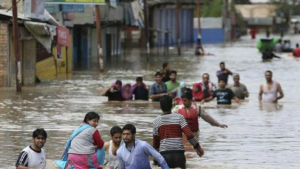 Six days of rains in Indian-administered Kashmir have caused the area’s worst flooding in more than five decades, killing more than 120 people, submerging hundreds of villages and setting off landslides, Indian officials said on Monday.

Landslides and flash floods in Kashmir – a Himalayan region divided between India and Pakistan – and adjoining parts of northern and eastern Pakistan have left more than 320 people dead so far.

The Pakistani toll has crossed the 205 mark, according to a senior government official, and thousands of homes have collapsed.

Speaking in the Pakistani capital Islamabad on Monday, Ahmad Kamal, the National Disaster Management Authority spokesman, said at least 383 people had also been injured over the past six days.

He said flash floods and landslides had killed 131 people in Punjab and 74 others in Pakistani-administered Kashmir and Gilgit.

Pakistani troops were busy helping civilian authorities in rescue operations and in reaching aid to stranded villagers, the Pakistani army said in a statement.

Army and the civilian authorities have so far evacuated nearly 9,000 people to safer places from nearly 530 villagers that were inundated by flood waters, Kamal said.

He said authorities were gearing up to deal with the worsening of the situation as the waters of the Chenab and Indus Rivers was rising.

Pakistani TV channels showed pictures of flooding from different cities and villagers, with the water raging through the streets and roads, causing heavy losses.

For his part, OP Singh, director of India’s National Disaster Response Force, said on Monday that more than 5,200 people had been rescued from various parts of Indian-administered Kashmir.

Medicines, blankets, tents and food rations were being supplied to people stranded on rooftops, he said, as most parts of Srinagar, the main city in Indian-administered Kashmir, were submerged.

Omar Abdullah, chief minister of India’s Jammu and Kashmir state, said these were the worst floods to hit Kashmir in decades.

His administration had launched rescue and relief operations on a war footing and was working closely with the army to reach people in the worst-hit areas.

“This is an unprecedented situation and we are doing the best we can under the circumstances. Please don’t panic, we will reach you, I promise,” Abdullah said on Twitter.

Narendra Modi, the Indian prime minister, who surveyed the flood-hit areas by helicopter on Sunday, called the flooding a “national disaster”.

He promised the state an additional 10bn Indian rupees (nearly $170m) in funds for aid and compensation to those hit by the floods.

In a letter to Nawaz Sharif Pakistan’s prime minister, on Sunday, Modi offered assistance in relief efforts in the Pakistan-administered portion of Kashmir.

“In this hour of need, I offer any assistance that you may need in the relief efforts that will be undertaken by the Government of Pakistan. Our resources are at your disposal wherever you need them,” Modi wrote to Sharif.

India and Pakistan have fought three wars since independence from Britain in 1947, two of them over Kashmir, which is claimed in its entirety by both countries.