KARACHI: The body of what fishermen say is an estimated 70-foot whale washed up on the coast of Karachi on Tuesday morning.

Local fishermen in the locality of Ghas Bandar area along the coastal belt said the whale got entangled into their fishing net, and they later dragged the body to the shore with the help of other people. 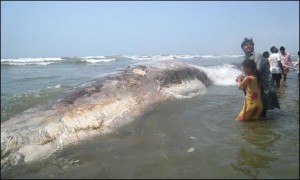 They said the whale was already dead when it was dragged to the shore early morning by 10 to 12 fishermen on two launches.

The local administration has so far made no comment on the appearance of the whale.

For fear of collision with boats, local fishermen generally view whales as dangerous and maintain a safe distance from them when out in the sea.

Last month, a 30 to 40-foot whale was found dead near the coast of Karachi.

Earlier in July 2010, a whale shark that died after becoming entangled in a net cast off Karachi’s Hawkesbay beach was dragged on to the shore by local fishermen. Moreover, in September 2011, the battered body of a whale with some of its parts missing washed up on the Sea view beach. In 2013, a whale shark caught in the Sonmiani Bay area despite a ban on wishing was brought to the Karachi harbor.

Over a thousand dolphins, whales and porpoises are killed every year in Pakistan mainly due to the widespread use of large gillnets that are prohibited under a United Nations General Assembly resolution.

Unregulated use of gillnets in commercial fishing and a huge increase in fishing vessels are regarded as major threats to the species.