Looming vote in Yitzhar on whether residents can use violence against their own army exposes critical debate in Israel. 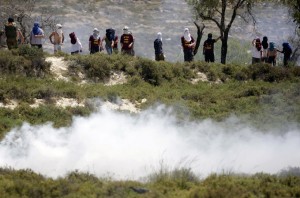 Yitzhar, Occupied West Bank — In two weeks, the residents of this settlement, known as one of the West Bank’s most ideological and uncompromising, will vote on whether it’s acceptable to fight the army that is assigned to protect them.

Yitzhar is a small town of about 1,100 people perched on a hill outside of the Palestinian city of Nablus, but it has developed an oversized reputation. In 2011, it earned the distinction of carrying out more attacks on Palestinians than any other settlement in the occupied West Bank: One out of every six incidents documented by the United Nations that year involved a resident of Yitzhar.

Earlier this month, though, residents went after a less common target. Six officers from the Israeli border police were injured by stone-throwing settlers on April 8 when they demolished a house that was built without the proper permits. Settlers also trashed an army post and slashed the tires of a colonel’s jeep.

The army responded by closing a notorious Yitzhar yeshiva, or Jewish seminary, called Od Yosef Chai (“Joseph Still Lives”). Border police took control of the site on April 11 after the local army commander declared it a military zone. His order forbids anyone from entering for two months, and today the site is barricaded and guarded by armed officers.

The attack, while hardly unprecedented, has touched off a controversy within Israel about how the state should deal with growing settler violence. Some politicians have labeled the residents of Yitzhar “terrorists”, a term almost exclusively applied to Palestinians, and called on the army to set up checkpoints, or even evacuate the settlement.

Within Yitzhar, the attack has also been debated. The vote later this month will decide whether stone-throwing and other acts are a valid response to future demolitions: Municipal officials have said they will resign if the town votes yes.

“The army can come and do things that upset us, but there have to be limits,” said Ezri Tubi, a Yitzhar resident. “This vote is an inner vote, to decide if there are borders and ways to act in harsh situations like this… this will have to be settled.”

For now, though, the closure of the yeshiva has prompted anger among residents, who see themselves as unfairly targeted. On this point they are in unlikely agreement with the Israeli left, where the army’s decision is dismissed as a symbolic gesture.

“There’s a long history of this kind of behaviour,” said Yehuda Shaul, a member of Breaking the Silence, a group of former Israeli soldiers who document army activities in the West Bank. “The discrimination in law enforcement is embedded in the system. The fact is that police are not given orders to crack down on settler violence.”

RELATED: Living in fear in Hebron

The Israeli army says it closed the yeshiva because it has become a “hub” for attacks on the surrounding communities.

“The reason is twofold, first because of the rising violence [against Palestinians] that is originating from the area of the yeshiva,” said Lt. Col. Peter Lerner, an army spokesman. “And secondly because of the recent violence there directed at the army. This vandalism, it is a major concern for us.”

Much of the violence, the army says, stems from the teachings of Od Yosef Chai, which has in the past received state funding. Yitzhak Shapira, the school’s head rabbi, published a book in 2009 which argued that Jews are permitted to kill non-Jews who threaten them. His tract, Torat HaMelech (“The King’s Torah”), even extended its reasoning to children: “It is reasonable to harm children if it is clear that they will grow up to harm us,” he wrote.

Residents of Yitzhar dismiss the attacks as pranks, graffiti painted on mosques and the occasional olive tree set ablaze. This is a vast understatement: The United Nations issued a special report on Yitzhar in 2012 that documented 70 attacks on the surrounding Palestinian villages during the previous year, the largest number carried out by any single settlement. Fifty people were injured, and more than 2,500 trees damaged, in the 2011 attacks alone.

Still, residents point instead to Palestinian attacks against their settlement. Four times this year, they say, buses carrying girls back from school were attacked with Molotov cocktails. They complain that the army has done little to stop the violence. “Sometimes we feel that the army is more like the United Nations, in between, to separate, and there are complaints about it,” said Tubi.

Lerner dismissed the criticism, saying that “the army is committed to safeguarding the security and safety of the citizens of the state of Israel, and all persons. So outright, that’s wrong.”

Critics, though, say the army is not prepared or allowed to react to settler violence. Indeed, the soldiers assigned to Yitzhar stood by and watched while their base was trashed earlier this month.

These attacks are hardly uncommon: Settlers broke into the regional army command near Beit El in 2012 to protest demolitions in the settlement outpost Migron and elsewhere; a similar riot in 2011 targeted an army base in the Jordan Valley.

But analysts and former soldiers say restrictive rules of engagement bar soldiers from responding forcefully when settlers attack Palestinians or army posts. In January, for example, masked settlers raided a water reservoir being built in the nearby Palestinian village of Urif, throwing stones at nearby schools and family homes. A video released by the Israeli human rights organisation B’Tselem shows soldiers watching; they make no effort to stop the violence or arrest the perpetrators.