NEW YORK/HAMBURG: Wi-Fi in the sky is taking off, promising much better connections for travelers and a bonanza for the companies that sell the systems. 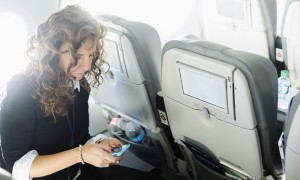 With satellite-based Wi-Fi, Internet speeds on jetliners are getting lightning fast. And airlines are finding that travelers expect connections in the air to rival those on the ground – and at lower cost.

But the fast evolution of rival systems and standards, such as Ku band and Ka band, pose a big question for airlines: which one to choose?

Equipping fleets can cost hundreds of millions of dollars, and airlines don’t want to see their investment quickly become outdated due to newer technology. That’s made some cautious about signing up.

“We don’t want to end up with a Betamax,” said Peter Ingram, chief financial officer of Hawaiian Airlines, referring to the Sony video format that eventually lost out to the VHS standard, leaving many consumers with obsolete systems.

Hawaiian is still considering which system to use.

The drive for in-flight connectivity also has intensified after the disappearance on March 8 of Malaysia Airlines Flight 370 with 239 people aboard. Search teams are scouring parts of the Indian Ocean for the missing aircraft, and it might have been better tracked if a satellite system capable of streaming cockpit data had been on board.

The US market for airborne Internet got a big boost last November after the US Federal Aviation Administration allowed passengers to use smartphones, tablets and e-readers throughout a flight, ending a long-standing ban on their use during takeoff and landing.

While the change hasn’t been adopted worldwide, the FAA’s move is expected to lead to greater use of devices, and bandwidth, on planes.

About 40 percent of US jetliners already have some Wi-Fi, but the race is on to wire the rest of a growing global fleet, and to make the existing connections better.

The number of commercial planes worldwide with Wi-Fi, cell service or both is expected to more than triple over the next 10 years, to 14,000 from about 4,000 currently, with much of that growth in Asia, according to research firm IHS.

Even with a tripling, only half of the worldwide fleet will be wired in 2022, suggesting demand for new systems will last longer.

Much of the US fleet will need upgrades to access satellites, since many planes currently are equipped for ground-based transmission, which is typically slower than satellite.

“Passengers of the future want to be connected when they want,” Chris Emerson, senior vice president of marketing at Airbus, told Reuters during the Aircraft Interiors Expo in Hamburg.

“Everyone wants Internet the way they have it on the ground, so it has to be cheap or free.”

Satellite technology will speed up onboard connections sevenfold, to about 70 megabits per second next year, fast enough to download a two-hour high-definition movie in about four minutes. Of course, that bandwidth will be shared among all of the users on the flight, which could number 200 or more.

Satellites also will allow service to reach developing markets in Asia and Latin America, and to offer expanded service in the U.S. and European markets.

Investors expect the global expansion and faster speeds will fuel greater use of services, with revenue split between the providers and the airlines.

It also will drive hardware sales, as airlines outfit aircraft with antennas, radios and routers. Honeywell, for example, makes fuselage-top antennas that link to the Global Xpress network provided by Inmarsat PLC, which operates on the Ka band.

In demonstrating the GX system at the Hamburg show, Honeywell said the system can deliver up to 50 megabits per second consistently around most of the globe, and it plans to test it on its own plane this summer, while Air China is expected to start trials with it in late 2014 or early 2015.

“GX is going to be a real game changer for airlines and their passengers from 2015 when the service comes online,” John Broughton, director of product marketing for GX at Honeywell, said in an interview.

A rival standard, Ku band, operates in a lower frequency band. While it may be able to achieve higher bandwidth than Ka band in certain areas, its overall connectivity is not as consistent, especially on long-haul flights over oceans, experts said.

Gogo used the Hamburg show to announce its 2Ku system, that will use a special dual antenna made by ThinKom Solutions Inc to raise the capacity of the Ku band system to 70 mbps, a leap from its current systems that operated at 3 to 10 mbps. Gogo also offers Ka band satellite connectivity and built its business on ground-based cell-tower technology in the United States.

The improving systems mean customers will demand better connections. Some frequent fliers with status on several airlines say they choose flights based on Wi-Fi availability.

“It becomes an ante at the table,” said Jonathan Schildkraut, an analyst at Evercore Partners, which co-managed Gogo’s IPO last June.

But the variety of systems poses tough decisions for airlines, which risk choosing a technology that could become outdated.

Ingram, the CFO of Hawaiian Airlines, said the choice and cost of a system is especially important for his fleet since it mostly carries people on vacation – people who don’t want to be tethered to the office.

“The technology in the Wi-Fi space for trans-Pacific flying is still evolving,” he said, “so we haven’t made any final decisions yet.”

German airline Deutsche Lufthansa AG knows the perils. It originally worked with Connexion, a Boeing unit developing in-flight Wi-Fi that operated a decade ago but failed to attract enough customers.

“We were a little bit unfortunate,” CEO Christoph Franz said in an interview. “We had spent millions to equip our aircraft.”

Lufthansa has since outfitted more than 90 percent of its long-haul planes with satellite connectivity.

But it is taking a step-by-step approach for other planes, outfitting about 30 Airbus A321 aircraft with a system that can stream content from an onboard server to handheld devices, but doesn’t connect to the internet.

“We need a decent provider for that, but we didn’t want our customers to wait,” Franz said. He expects a “triple-digit-million” euro investment to outfit the full fleet.

“We are ready to do this,” he said. “But we have to look at the bill. We will see which system at the end of the day turns out to be the most affordable and the fastest.”