THE result of the American presidential election on November 6th could determine the shape of Israel’s election in January. A win for the Republican candidate, Mitt Romney, may make Binyamin Netanyahu, his old friend and Israel’s current prime minister, seem pretty invincible. Invincible enough, anyway, to deter Ehud Olmert, the former prime minister and Mr Netanyahu’s nemesis, from running against him. 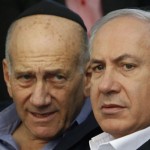 If, on the other hand, President Barack Obama wins, Mr Olmert may find the prospect of returning to office irresistible. He is itching to run, despite an ongoing trial for bribery and other unfinished legal business—but only if he stands a fair chance of upending Mr Netanyahu’s rightist-religious coalition.

Some polls suggest he would, especially if Mr Netanyahu was seen to have backed the wrong American horse and to be vulnerable, now, to some vengeful hostility from a second-term Obama administration. If Mr Olmert does run, others, like the former foreign minister, Tsipi Livni, may decide to do so with him. Mr Netanyahu may no longer be a shoo-in in terms of his ability to form a new coalition after the election. At least one component of the present Netanyahu coalition, the Sephardic-religious Shas party, might be prepared to move across to an Olmert-led alliance.

But even if, as others predict, Mr Olmert and his allies failed to dislodge Mr Netanyahu’s Likud party from power, they would change the face of the election campaign. The focus would shift markedly, from domestic issues to peace policy. Mr Olmert claims he was close to a comprehensive peace deal with the Palestinians in 2008 before being forced to resign as prime minister amid a welter of financial allegations.

That version of events has been publicly corroborated by the usually reticent Palestinian president, Mahmoud Abbas. Mr Olmert has since stood trial on the allegations that drove him from office, and been acquitted. His supporters speak darkly of a plot, hatched on the far right and financed in America, to topple him before he made a deal that would have ended the occupation, rolled up many of the settlements on the West Bank, and created an independent Palestinian state.

He was convicted, however, on another, lesser charge. And the state prosecution, in a rare move, has announced that it will appeal his acquittals to the Supreme Court. The trial for bribery, in which he is one of a dozen defendants, is a further complication.

Many voters, even those for whom a peace deal is a priority, will have a hard time supporting a politician so tainted. But any belief such voters may have had in Mr Netanyahu’s occasional protestations that he, too, seeks a deal with the Palestinians will have been put to rest by the merger last week of his Likud party with Yisrael Beitenu, the party of his ultra-hardline foreign minister, Avigdor Lieberman. Mr Olmert reckons that at the end of the day, if presented with a realistic prospect of dislodging Mr Netanyahu and resuming the abandoned peace process, most moderate Israelis would swallow hard, and give the peace ticket their backing. (Source; The Economist).