Musharraf requested the court to allow him to travel to the UAE to see his ailing mother. 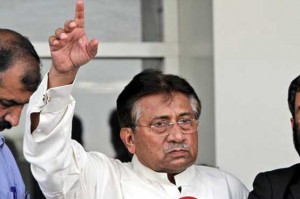 Peprations for Musharraf’s departure have been finalised, sources told.

Sources also revealed that if court allowed Musharraf to go abroad, he could take flight from Chaklala Airbase at 8:00pm today.

Earlier today, Musharraf was indicted by a special court hearing the high treason case against him, becoming the first ever military ruler to face criminal prosecution.

Musharraf, who personally appeared in court, is accused of treason under Article 6 for suspending, subverting and abrogating the Constitution, imposing an emergency in the country in November 2007 and detaining judges of the superior courts.

The 70-year-old former president, who is the first military ruler in Pakistan’s history to be tried in court, has rejected all the charges leveled against him.

“Whatever I did, I did for the country and its people. I am sad that I am being called a traitor,” Musharraf said.

Musharraf also said that he gave 44 years of his life to Pakistan Army and made defence invincible, adding that he gave repute and progress to the country.

Replying to this, Prosecutor Akram Sheikh said he has never used the word “traitor”.

The three-judge court headed by Justice Faisal Arab of the Sindh High Court read out the indictment against the ex-army strongman.

Prior to the indictment, Farogh Naseem, a new lawyer in Musharraf’s defence team, requested the court to allow his client to travel to the UAE to see his 95-year-old ailing mother.

He said the Constitution did not allow anyone to restrict the movements of a citizen.

Naseem said Musharraf had arrived in court voluntarily, adding that the warrant against his client had not been implemented.

He said his client himself was unwell and that Musharraf’s proper treatment was only possible in the US.

The defence team has filed two applications in this regard and the court said it will decide on these later in the day.

Security measures at the court were beefed up in anticipation of Musharraf’s appearance in court on Monday, in compliance with an order issued on March 14, demanding his presence, enforced or voluntary, in the dock.

Musharraf was admitted to the Armed Forces Institute of Cardiology (AFIC), Rawalpindi on January 2 after he complained of “heart problem” on his way to the court.

The military has ruled Pakistan for about half of its 66-year history and no ruler or top military commander has ever faced criminal prosecution before Musharraf.

Since Musharraf returned to Pakistan from self-exile in March last year, he has faced prosecution in four major cases, including for his alleged involvement in the murder of former Prime Minister Benazir Bhutto in 2007 and the killing of Baloch nationalist leader Akbar Bugti in 2006.