Attacker bludgeons three women with a hammer as they sleep in central London’s Cumberland Hotel.

An attacker has bludgeoned three Emirati women with a hammer in a central London hotel during a possible theft attempt. 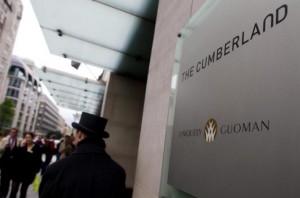 One victim was in a critical but stable condition at a central London hospital, while the other two both sustained serious injuries but were not in a life-threatening condition, following the attack early on Sunday at London’s Cumberland Hotel.

“We have been clear – we believe the motive for the attacker to be in the room was theft”, a spokesman for the Metropolitan Police told Al Jazeera on Tuesday.

However, a statement on the London Metropolitan Police’s website said that “officers retain an open mind regarding the motive for the attack”.

Detectives believe that the attacker was disturbed when some of the occupants of the room woke up, and the three women were subsequently assaulted with the hammer. The blood-covered weapon was left in the room.

The women were sleeping with their three children in adjoining rooms on the hotel’s seventh floor. The door of the room was unlocked at the time of the attack, possibly because the women were travelling as part of a large family party.

The spokesman said the police were initially contacted by a member of the public, though he declined to specify who, due to the nature of the ongoing investigation.

“Right now we are focused on looking after the vicitims and finding out who is responsible,” he said.

The incident was highly unusual not only due to the nature of the attack, but also because ot its occurence in an area of London with a relatively low level of crime.

“This was an unusually violent attack on three women and I am very keen to speak with anyone who was in or around the hotel between 01.00hrs and 02.00hrs on Sunday morning,” said Detective Chief Inspector Andy Chalmers in the statement.

Police on Tuesday appealed for information from the public.