The future of the Salafi al-Nour is fraught with uncertainty. 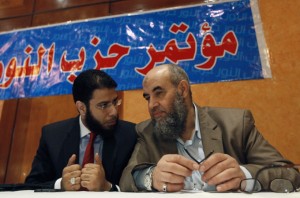 Al-Nour, Egypt’s largest Salafi political party was the only religious party to support the military-backed move. It also played a decisive role in selecting Egypt’s first interim prime minister as it vetoed Mohamed ElBaradei, the Noble laureate, for his partisanship. ElBaradei was later appointed as vice president and another more acceptable candidate to al-Nour, Hazem Beblawi, was named prime minister.

Al-Nour was also part of the 50-member committee appointed by interim President Adly Mansour to amend the constitution. It campaigned for a successful yes vote in the January constitutional referendum and announced in early May its support for former defence minister and presidential contender Abdel Fattah el-Sisi.

Yet, despite such prominence, the party seems to face growing political isolation and an uncertain future.

It appears to have been deserted not only by coup opponents, including many Salafis, but also by fellow coup supporters and even by Sisi himself.

“The majority of the members of the al-Dawah al-Salafyia (the Salafi call) thought that Sisi could secure Egypt during this period,” Khaled Alam al-Deen, a senior leader of al-Dawah al-Salafyia told Media. He justified his group’s decision to support Sisi’s presidential bid by saying:  “Egypt is facing international conspiracies. We fear that Egypt could be another Syria or Libya if state institutions or central authority collapse. Sisi will be the most capable to lead state institutions and to assure foreign countries willing to continue their aid,” al-Deen, a former Morsi adviser, said .

In statements to the media, al-Nour officials provided many reasons behind their decision to support Sisi for president.  Mohamed Salah, a member of al-Nour’s media committee,  told  a local TV station that Sisi has the advantage of not belonging to any specific political party or ideology, hence making him more acceptable to many Egyptians and “less ideologically Salafi”.  Salah also thought that Sisi has better “understanding of foreign dangers threatening Egypt”.

Younis Makhyoun, al-Nour’s president, told local media  that his party supported Sisi  because of many reasons, such as his “strategic vision” and “administrative experience within the military”.  Makhyoun also thought that Sisi was “humble, committed, controls his anger, does not like to show off, speaks with logic, and is a practical man”.

Al-Dawah al-Salafiya is a network of prominent Salafi scholars who set up the al-Nour party, after the uprising in 2011, to represent their views in Egyptian politics.

The group continues to play a prominent role in guiding al-Nour policies although it repeatedly stresses on its organisational independence from al-Nour. Yet, it often meets ahead of major political events, such as sponsoring a presidential candidate, and its vote consistently matches that of al-Nour’s.

Analysts like Abdelfattah Mady, a political science professor at Alexandria University, believe al-Nour’s backing of Sisi’s presidential bid was expected. “Right from the beginning, al-Nour has been supportive of the transitional roadmap and all of its details,”

Others beg to differ. Hesham Jafar, a close observer of Egypt’s political religious movements, thought that al-Nour’s support for Sisi was a strange decision.

“Al-Nour had other options. Some liberal parties, such as the Social Democratic Party, refrained from supporting Sisi and gave their members the freedom to choose.”

Jafar thought that al-Nour went too far in supporting the military-backed regime in Egypt at the expense of deepening its isolation among a large and growing number of Salafi and religious voters angered by the coup and ongoing human rights abuses.

“Many of al-Nour’s members have deserted it,” Jafar said.

Jafar thinks that al-Nour is too preoccupied with its political rivalry with the Muslim Brotherhood and with attempts to repackage itself as the alternative to the Brotherhood. “Al-Nour suffers from a deeply rooted Salafi intellectual tradition that has tolerated authoritarian leaders in order to avoid their wrath,” Jafar told Al Jazeera.

This view is further confirmed by what al-Deen said: “Rationalism and realism are part of the Salafis’ teachings. We believe that during turmoil we can choose the bad to avoid the worst.”