Egyptians have been given an extra day to cast their ballots in the country’s presidential election, after two days of low voter numbers at polling booths. 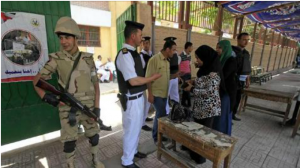 Abdel Fattah el-Sisi, Egypt’s former army chief who quit in March to run for president, is expected to easily win, but his campaign had hoped for a large turnout as a decisive show of support.

On Wednesday, there was little sign that the number of voters had picked up, with one polling station in the upscale Zamalek district in Cairo failing to attract a single voter more than an hour after it opened, the AP news agency reported.

Supporters of Egypt’s first freely elected president, Mohamed Morsi, who was ousted by Sisi last year, have called for a boycott of the vote and have said they will not recognise its outcome.

The head of the Electoral commission, Abdel Aziz Salman, claimed 37% of Egypt’s 53 million eligible voters had taken part in the elections but analysts casted doubt on that figure.

Abdullah al-Arian, an assistant professor of History at Georgetown University, told Al Jazeera that the government figures seemed “inflated” based on reports out of the country.

He added that extension of voting for a third day showed that there was a “sense of panic” setting in among Egypt’s leaders, who had tried to portray Sisi’s election as a “universal concensus”.

Sisi’s only rival, Hamdeen Sabahi, slammed the ballot extension, saying it called into question the “integrity of the process”.

The organisers of the vote said they extended the election because of a “heatwave” that caused crowding at polling stations on Tuesday evening, the AFP news agency reported.

Al-Arian said that the low turnout was a consequence of the calls for boycott by anti-coup activists, voter apathy, and disenchantment by those who previously supported the election process.

Some activists who supported the uprising against former President Hosni Mubarak fear Sisi could be an autocrat in the making. Others had backed Sabahi in the hope that he would preserve the values of the 2011 revolution.

The April 6 movenment, which played a pivotal role in the January 25 Revolution has also called for a boycott of the vote, dismissing the polls as a “military election”.

The voter turnout has not gone unmentioned by Egypt’s newspapers, even those generally supportive of Sisi.

Al Shorouk declared “The ballot boxes are looking for voters” on its front page and Al Masry al Youm wrote “The state is looking for a vote”.

Egypt, the Arab world’s most populous country, has been rocked by political instability since the fall of the Mubarak government.

The country’s deteriorating economic situation and frequent violent episodes meant Sisi was welcomed by large segments of Egyptian society as a force for stability after his removal of Morsi last July.