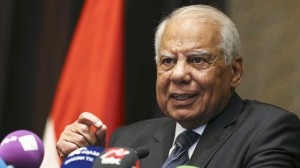 Mr Beblawi said the decision was taken “in light of the current situation the country is going through”.

It comes amid a series of strikes, including one by public sector workers and rubbish collectors, and an acute shortage of cooking gas.

Since then, more than 1,000 people have been killed and thousands of others detained in a crackdown by the security forces on the Muslim Brotherhood, the Islamist movement to which Mr Morsi belongs.

Militants based in the Sinai peninsula have meanwhile stepped up attacks on government, police and military personnel, killing hundreds.

Mr Beblawi did not give a clear reason for the cabinet’s resignation in his televised address.

He acknowledged that Egypt had witnessed a sharp rise in strikes, but said no government in the world could have fulfilled all the demands of its people in such a short period of time.

“The cabinet has over the past six or seven months shouldered a very difficult responsibility… in most cases the results were good.”

“The country is facing huge dangers. It is time we stood together to protect it and help it get out of this narrow tunnel,” he added.

Mr Beblawi also noted that his government had completed the first part of the road-map outlined by the interim authorities by holding a referendum on a new constitution in January.

Government spokesman Hani Saleh told the AFP news agency that there was a “feeling that new blood is needed”.

“Egypt is moving forward. This decision will not affect foreign relations or internal stability,” he added.

Mr Beblawi has been criticised in local media for his perceived indecisiveness and inability to deal with the country’s economic woes.