CAIRO: An Egyptian court sentenced Muslim Brotherhood leader Mohamed Badie and 36 other to life in prison Saturday, and confirmed death sentences for 10 others, most of them on the run. 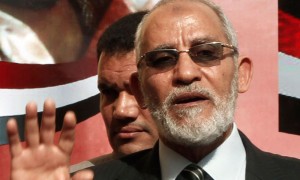 Badie, convicted of involvement in deadly protests, had already received death sentences in two other cases in a crackdown on opposition after last year’s military ouster of president Mohamed Morsi.

Of the 10 defendants condemned to death last month in the same case, whose sentences were confirmed, an Islamic cleric has since been arrested.

Another defendant was sentenced to three years.

Egyptian courts have sparked international concern over a spate of death sentences for more than 200 people in several mass trials.

On Saturday, presiding Judge Hassan Farid said the defendants were involved in violence and the murder of two people during protests last July after the army overthrew Morsi, who belonged to the Brotherhood.

He said the defendants had committed the violence “to achieve terrorist goals.” The Brotherhood has been designated as a terrorist movement, with much of its leadership imprisoned, including the former president.

Following Morsi’s overthrow, staged rallies that often ended in clashes with police and their opponents.

At least 1,400 people, mostly Islamists, have been killed in street clashes, and scores of policemen and soldiers have died in militant attacks.

About 700 Morsi supporters were killed in just one day in August, when police broke up two protest camps in Cairo.

Morsi’s supporters rampaged across the country, attacking police stations and torching dozens of churches and Christian properties, blaming the minority for backing the Islamist’s overthrow.

President Abdel Fattah al-Sisi, the former army chief who toppled Morsi and was elected in May to succeed him, has pledged to wipe out the Brotherhood.

The movement, founded in 1928, was banned for decades before an early 2011 uprising that overthrew veteran strongman Hosni Mubarak. It went on to win every election before Morsi’s overthrow.

It has since been decimated, with an estimated 16,000 members and alleged supporters in jail, and has lost much ground amid accusations that it is involved in militant attacks.

The crackdown has extended to secular dissidents and even journalists, with three reporters working for Al-Jazeera English receiving sentences of up to 10 years in prison for allegedly supporting the Brotherhood.

The case against them, who include the celebrated Australian journalist Peter Greste, led to international calls for their release.

The prosecution had accused them of aiding a “terrorist group” — the Brotherhood — on evidence that was not clarified during the trial.

The Brotherhood insists it is peaceful. Most of the attacks have been carried out by militant groups that are ideologically similar to Al-Qaeda, with no proven ties to the Brotherhood.

But there have been indications that some Brotherhood members are taking part in attacks on police.

On Friday, four people were killed apparently preparing explosives at a farm owned by a senior Brotherhood member, the interior ministry said.