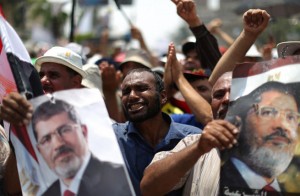 The 683 were sentenced in Egypt’s southern Minya courts, convicted of involvement  in the killing and attempted murder of policemen in the province in August last year, the same time that police forces killed hundreds of former president Mohammed Morsi supporters in clashes in Cairo.

The total convicted to death now surpasses 1000, but the court has allegedly reversed 429 death sentences from the March conviction to life sentences rather than death. (AFP)