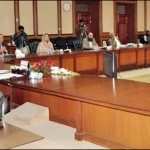 According to the decision, the Federal Government would contribute Rs 13.419 billion whereas the rest amount of Rs.10.419 billion would be chipped in by the Punjab Government.

The ECNEC, which met here at the Prime Minister office with Finance Minister Mohammad Ishaq Dar in the chair, approved the Metro Bus Project subject to clearance of Environmental Impact Assessment (EIA) by the competent authority. The Islamabad portion comprising 13.9 kilometers, would include Peshawar Mor Interchange as designed by the Capital Development Authority and 14 bus stations with allied facilities.

The Metro Bus System will be a world class facility being provided to the residents of twin cities, as per international standard and as per the vision of Prime Minister Muhammad Nawaz Sharif.

The construction of long awaited Peshawar Mor Interchange under this project will go a long way in redressing the congestion problem at this intersection, provide relief to the people, and help in smooth flow of traffic during peak hours.

The project will start from I J Principal Road at Faizabad where Rawalpindi portion terminates, and after traversing through IJ Principal Road, 9th Avenue, and Jinnah Avenue, will finally terminate at Pakistan Secretariat.

The project envisages construction of 13.9 KM long dedicated signal free corridor of 9.60 to 10.10 meters width at normal section and from 19.00 to 21.10 meters width at Metro Bus System (MBS) stations and tranches in Islamabad territory.

It will be capable of accommodating articulated buses running simultaneously in both directions.

The meeting was attended by Pervaiz Rashid, Minister for Information, Broadcasting and National Heritage, Ahsan Iqbal, Minister for Planning and Development, Anusha Rehman, Minister of State for Information Technology, federal secretaries and senior officials from federal and provincial governments.