WHO calls on virus-affected countries to do screenings at major airports, seaports and land crossings.

West African nations affected by the worst-ever outbreak of Ebola have been urged to screen “all people at international airports, seaports and major land crossings” in order to stop its spread. 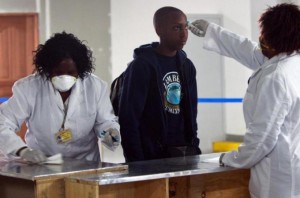 The World Health Organization said on Monday that authorities should stop anyone with signs of the virus from traveling, days after it warned that the magnitude of the outbreak was “vastly underestimated”.

The WHO reiterated that the risk of getting infected with the virus on an aircraft was small and there was no need for wider travel or trade restrictions.

“Any person with an illness consistent with Ebola should not be allowed to travel unless the travel is part of an appropriate medical evacuation,” the UN agency said.

Cameroon meanwhile closed all its land, sea and air borders with Nigeria in a move to prevent the spread of the disease, a government spokesman told the AFP news agency on Monday.

No cases of Ebola have been recorded in Cameroon, which shares a 2,000km border with Nigeria, where the virus has killed four people and infected about a dozen others.

The outbreak in West Africa has already killed 1,200 and infected more than 2,000.

Liberia’s information minister said on Tuesday that all 17 suspected Ebola-infected patients who fled a quarantine center in West Point, Monrovia on Sunday have been found and transferred back to treatment centers.

“We are glad to confirm that all of the 17 individuals have been accounted for and have now been transferred to JFK Ebola specialist treatment center,” said Lewis Brown.

He also said that three infected African doctors who had received the experimental Ebola drug Zmapp were showing “remarkable signs of improvement”, quoting an assessment by the doctor overseeing their treatment.

The virus spreads through bodily fluids.

The authorities are now considering sealing off the area, which is home to around 75,000 people.

“All those hooligans who looted the center are all now probable carriers of the disease,” said Brown. “To quarantine the area could be one of the solutions.”