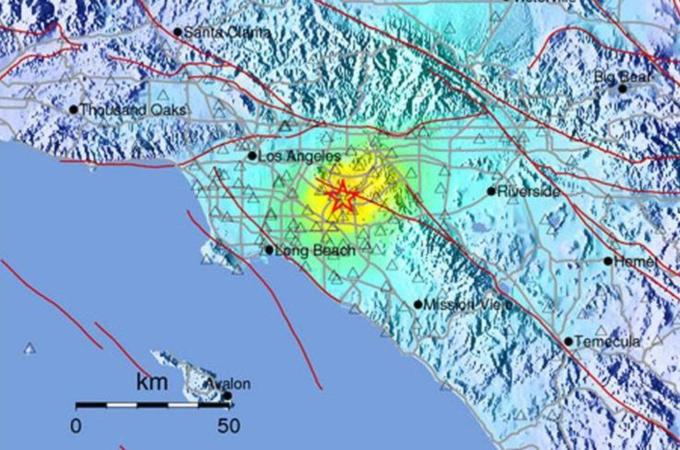 A magnitude-5.1 earthquake has shaken Los Angeles and surrounding counties, authorities have said.

The US Geological Survey (USGS) said the quake struck at 9.09pm on Friday night near Brea in Orange County – about 32km southeast of downtown Los Angeles. It was felt as far south as San Diego and as far north as Ventura County, according to citizen responses collected online by the USGS.

Broken glass, gas leaks, a water main break and a rockslide were reported near the epicentre, according to Twitter updates from local authorities.

At least five aftershocks ranging from magnitudes-2.7 to 3.6 were recorded, according to the USGS. Earlier in the afternoon, a magnitude-3.6 quake hit nearby in the city of La Habra.

The Los Angeles Fire Department said it was looking for signs of damage or injuries.

Callers to KNX-AM reported seeing a brick wall collapse, water sloshing in a swimming pool, and wires and trees swaying back and forth.

A helicopter news reporter from KNBC-TV reported that rides at Disneyland in Anaheim – several miles from the epicentre – were stopped as a precaution.

Tom Connolly, a Boeing employee who lives in La Mirada, the next town across from La Habra, said the 5.1 quake lasted about 30 seconds.

“We felt a really good jolt. It was a long rumble and it just didn’t feel like it would end,” he told The Associated Press by phone.

“Right in the beginning it shook really hard, so it was a little unnerving. People got quiet and started bracing themselves by holding on to each other. It was a little scary.”

Friday’s quake hit a week after a pre-dawn magnitude-4.4 quake centred in the San Fernando Valley rattled a swath of Southern California. That jolt shook buildings and rattled nerves, but did not cause significant damage.

Southern California has not experienced a damaging earthquake since the 1994 magnitude-6.7 Northridge quake killed several dozen people and caused $25b in damage.