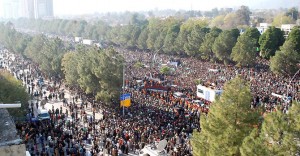 In my living memories I have not seen a political/religious leader single-handed gathered   thousands, if not millions, of people from various parts of Pakistan with children, women and old-aged marched 36 hours using different commutes and by walk towards capital and able to sit-in more than 3 days in front of the parliament house and other federal office buildings of Pakistan in appalling weather and then in presence of national and international media cameras, a group of leaders of the major political stakeholders of federal government came to meet with him, negotiate on his term and agreed most of his demands. Most of the anchors of the Pakistani satellite Televisions seriously acknowledged the efforts and demands of Dr. Allama Tahir ul Qadri. However, the traditional, rigid and incapable political/religious of Pakistan condemned Dr. Qadri’s activities and also there are some political elements who could not demonstrate courage to stand with Dr. Qadri and in his protest nevertheless they even did not go against Dr. Qadri’s demands.

Living in Australia, I putting all my routine matters aside watched the entire historic political showdown on various satellite channels of Pakistani because I did not want to miss out a single moment of this unusual kind of public protest in Pakistan which was making a history moment by moment. I don’t care how the traditional political/religious leaders, the government ministers and some media guru assessed the actions of Dr. Allama Tahir ul Qadri and condemned the long-march as well as the public protest led by Dr. Qadri as I have my own judgement entirely based on what I have seen on my television screen through a live coverage of this historic political protest Pakistan ever has especially in the in the last 40 years or so.

I don’t care even if there has been any hidden agenda of Dr. Qadri as being claimed by opponents of Dr. Qadri because I believe on what I have seen and I have heard in the 5 days of procession on the main street of the federal capital of Pakistan (Islamabad). I have not seen in my living memories so many national flags of Pakistan in the hands of thousands of children, youth, men and women in the killing cold weather of Islamabad in 5 days. I have not seen so much knowledgeable crowd (even children) of the agenda of their leader (Dr. Qadri) on the typical reformation of political system of Pakistan. I have not seen so much disciplined and patience masses (in thousands if not millions) many days with children, youth, women and senior citizens. I have not seen so much determined and confident leader of the Protestants who stood firmly on his demands despite of the threats of rebuke and castigation by the government agencies and threats of attacks by the terrorist groups. I have not seen a leader who in front of thousands of protesters ultimatum the government to come and talk within hours and compelled the rulers who were committed not to speak with him eventually bow down and negotiated with him in his cabin in front of thousands of protestants, the entire event was covering live by all national and international media and watching by millions of people globally through satellite televisions.

I have been in Australia for the 25 years holding Australian nationality but I can proudly say that in my last 25 years I have been writing for Pakistan in print media and raising my voice for injustices in my radio shows and debating on corruption & lawlessness in Pakistan through organising media & political forums in Australia. No one is pushing me to spend my time and efforts for Pakistan and no one is paying me to organise media events for Pakistan or for the people of Pakistan. This is my love and loyalty to my motherland (Pakistan).

Therefore, for me it doesn’t matter where you live and how long you live and which nationality you keep especially in this age when the world became a global village. Yes, what matter is how much loyal you are with your motherland?

In my view, the Pakistanis who live abroad and who hold other country’s nationalities should be more regarded when they demonstrate and fight for their motherland because despite of the fact that their lives are safe, their economical and social conditions are stable they are worried for about Pakistan day and night. Therefore, even if Dr. Qadri holds Canadian nationality I would appreciate him more because he had guts therefore he was rewarded citizenship by the Canadian government. And now he has demonstrated guts and ability to lead the people and organised such a historic event which has created a new history in Pakistani politics. This is the demonstration of extraordinary leadership skills that he managed to stick to at least 50,000 people in extreme cold weather in open and on the main road of Islamabad.

Pakistan needs revolutionary measures to put back on track economically, socially and politically and it cannot be achieved until the people should stand-up and organised showdowns like what Dr. Qadri has done. This is a historic example of how the rigid government and allies meltdown, come on the dialogue table and agreed on those constitutional demands of Dr. Qadri to be implemented which if implemented may throw existing rulers out from the Pakistani political system.

Now there are some so-called gurus of Pakistani media who are continuously condemning Dr. Qadri’s actions by exploiting his past political record and political/religious statements, being journalists, they have to understand that they should not put aside the basic principles of journalism just for the sake of their own vested interest. A journalist works in the public interest and talk on the basis of facts and reality of day to cover any event. Dr. Qadri’s entire event (long-march & protest) made new records in the political history of Pakistan in many contexts, now if Dr. Qadri and his team are exaggerating on some points for example; if there was an exaggerated figures on number of protestants given by the Dr. Qadri and his team then media associates had to understand that organisers of any event always claim the figures which they understand they should claim to prove the event was successful this is not something new. We can see in every political gathering and demonstrations being staged in Pakistan that even the responsible leaders claim millions of people in front of him whereas the ground realities look different. So, this should not be the matter of debate instead what the media and journalists should have done rather than making this as part of their media debate to elevate the rating of their TV shows that they should have used their own resources to count the protestants if they need to be included in their reporting.