Artillery shells have hit close to the center of Ukraine’s separatist-held city of Donetsk, killing at least 11 people, witnesses said. 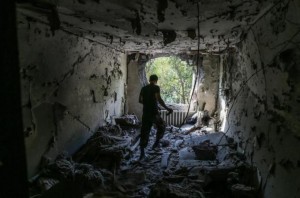 It was not immediately clear if the artillery was fired by government or rebel forces.

The blasts blew a hole on the third floor of an apartment block and left a broad crater on the pavement.

Nearby, a body covered by a sheet lay stretched out on the blood-stained ground.

The new casualty figure comes after local authorities on Thursday said 74 residents had been killed over the last three days in east Ukraine’s war-torn Donetsk region.

Meanwhile, the Ukrainian government announced on Thursday that it was dispatching its own convoy of humanitarian aid to troubled eastern Ukraine.

The government said trucks would depart from the government-controlled cities of Kiev, Dnepropetrovsk and Kharkiv for a town in the Luhansk region later in the day.

The announcement came as a Russian aid convoy inched towards the border, raising concerns in Kiev that Moscow could be aiming to send in arms for the separatists under the guise of civilian supplies.

Ukrainian Infrastructure Minister Maxim Burbak said three convoys totaling 75 trucks would be carrying around 800 tonnes of aid, including grain, sugar and tinned food, as well as other basic requirements.

Meanwhile, addressing Russian ministers and members of parliament in Crimea, the Ukrainian region annexed by Russian this year, Russian President Vladimir Putin said his country would stand up for itself but not at the cost of confrontation with the outside world, a conciliatory note after months of tough rhetoric over the crisis.

“We must calmly, with dignity and effectively, build up our country, not fence it off from the outside world,” Putin said.

“We need to consolidate and mobilize but not for war or any kind of confrontation … for hard work in the name of Russia.”

He also said Russia would do everything in its power to end the conflict in Ukraine as soon as possible and stop the bloodshed there.

The standoff over Ukraine is now becoming much more costly for both sides, with the EU and United States imposing economic sanctions, and Russia retaliating by banning imports of many food products.