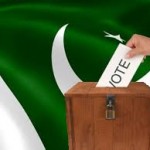 Can less than 40 percent turn-out in elections justify political parties to claim representation of 180 million Pakistanis ….

Pakistani media through collecting public interviews, holding talk-shows and releasing public opinions concluded that those who voted PML (N) in the last election were upset with Nawaz brothers – the Prime Minister Nawaz Sharif and Chief Minister of Punjab Mr. Shahbaz Sharif – the ground realities were also indicating that the ruling PML (N) failed to deliver anything revolutionary since they came into power in the capital. On the other hand, by-polls’ result indicates that PML (N) maintains their popularity especially in Punjab by securing 5 national assembly seats. Now the question is if putting the election process aside; does PML (N) really maintain a popular majority among 180 million people of Pakistan and justified to represent the entire nation of Pakistan?

Similarly; Pakistan Peoples Party (PPP) who failed to secure majority seats in the national assembly in the last election and lost the government now have win 3 national assembly seats, PTI secured 2 more seats where MQM and ANP secured one seat each in national assembly. Except PTI the other four parties (PPP, PML (N), MQM and ANP) parties somehow either in centre or in provinces ruled Pakistan in the last tenure of 5 years. In these 5 years, bad economy, decrease in revenue reserves, lawlessness, crimes, corruption broke all previous records. Life of a common person has been in such a terrible stage that cases of suicides are growing significantly.

Lawlessness in Karachi has been out of control in the last 5 years or so, the police and other law enforcement agencies failed to deliver any peace; if by chance any criminal is captured by law enforcement agencies the courts of law seems to be helpless in executing punishments, thousands of people have already been killed so far, the lawlessness and crimes in other parts of Sind are also horrible yet the two major parties PPP and MQM receiving victories in the election.

Now the most critical question for a patriotic Pakistani today is that can Pakistan and the people of Pakistan survive and are these political parties, their leaders and this system which is called a democratic system can rescue Pakistan from ongoing issues and problems? Or eventually it will drag Pakistan into disintegration?

The fact of the matter is that this democratic system in Pakistan doesn’t represent the 180 million people of Pakistan. No any fair election in Pakistan has ever received more than 50 percent voters at the polling booths. And, doesn’t matter whatever was the turn-out of the voters; the winner is who receive the majority votes from the ballet box. In this by-election, the voters’ turn-out was only about 37 percent, therefore, majority did not take part in this election yet political parties are still claiming that they are popular in public because their candidate won by receiving majority votes from the number of votes casted. Then the conservative and tribal culture in various parts of inland Pakistan don’t permit women to vote, high illiteracy rate also big restraint in providing common people a free and fair chance to cast their votes as per their choice.  Therefore, the people who don’t take part in election in this so-called democratic system are in majority and saying this system as a democratic system representing the entire population of the country is a shame. This is reason, public opinion, public interviews and surveys in the media shows that people in majority hate these so-called political pundits and their parties.

So, how these parties managed to achieve their goals on the day of the election? In this democratic system, the leaders of the political parties create their loyalists on the basis of their ethnicity, language, territorial identity. In rural areas people working on lands in farms are treated as slaves by their landlords who are the so-called political leaders. These farmers and labours have no choice but to vote to their masters. They are taken to the polling booths by landlords in their vehicles and ordered them to stamp on a particular sign of the candidate. Then there are Religious-cum-Political parties like Jamat-e-Islami, Jamiat Ulma-e- Pakistan, Sunni Tehrik and so on, which are not very popular among voters yet these parties maintain their followers on the name of religious sects.

Therefore, the party’s voters are not those who choose the party or a election candidate by liking party’s manifesto in the best interest of the country and nation, instead, they are party’s loyalists & followers who are committed to their party. Their loyalty or followings is linked with their demographic or religious affiliation with the party leader or election candidate or being farmers working candidate’s land or being labours working candidate’s industrial unit they are committed to vote them. Most of the candidates are history-sheeters, to meet the legal requirements as being candidate they lodge false and fake documents, they don’t pay tax and their focus is to win the election and become the ruling power of the state. Majority of these political parties and their candidates don’t work on educating people on their political or election manifesto instead they motivate their followers using racial or religious characteristics. This is the reason, majority of people don’t know candidate’s/party’s agenda instead they know what the sign of the party/candidate is and where to stamp on the ballot paper.

Pakistan can survive and can be far better without this alleged balloting system of his corrupt democratic system but cannot survive if this goes on. Democratic System is not just having political parties, political leaders, staging elections and forming cabinets and governments. It is the system of delivering the best required for the country and the nation. A corrupt democratic system where political parties are run by corrupt and unqualified leaders, landlords, business tycoons, and tribal leaders lead a nation and a country to a failed state – this is what happening in Pakistan.

An open display and use of dangerous weapon by the party workers at the polling stations and at the party offices open firing in air in celebrations of victory, live coverage by the media of the scenes and the shameful silence from the law enforcement agencies are the open abuse of a democratic system.

This is the reason a country like Pakistan, time and again, has to face an army rule on the name of saving the country and the nation from total disaster created by corrupt civilian leaders, however, unfortunately army is also a part of the society, army General have also proved to be part of the game and end up in hands of same corrupt system.

Pakistan needs serious overhauling from top to bottom in every department in order to cleanup this corrupt system, these corrupt so-called politicians and their parties on the name of democracy. Pakistan needs a system that suit to Pakistan in order demolish centuries old feudal and tribal system and corrupt bureaucracy, justice and government system.