KUALA LUMPUR: A missing Malaysian aircraft was flown for hours in a fashion “consistent with deliberate action” after dropping off primary radar, but hijacking could not be confirmed, the country´s prime minister said Saturday. 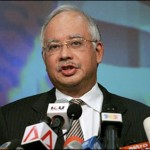 Final satellite communication with the Boeing 777 came more than six and a half hours after it vanished from civilian radar at 1:30am on March 8, Prime Minister Najib Razak told a nationally televised press conference.

The movement of the plane in the interim period, during which it changed direction and passed back over the Malaysian peninsula towards the Indian Ocean, was “consistent with deliberate action by someone on the plane,” Najib said.