Former U.S. Vice President Dick Cheney, the enforcer of the Bush administration’s lies about Iraqi WMDs, its pre-emptive strike doctrine, its assault on civil liberties and use of torture, and its no-bid contracts to war profiteers Halliburton, Blackwater, etc., is pulling the strings of Barack Obama’s policy to 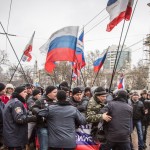 Victoria Nuland, Obama’s Assistant Secretary of State for European and Eurasian Affairs, was formerly a top foreign policy adviser to then Vice President Cheney, the man really in charge during the Bush years. As such, she was central to implementing Cheney’s agenda of regime change in Iraq, his attempt to orchestrate a nuclear strike on Iran, and the policy of targeting Russia and China with ballistic missile defense (BMD) systems to give the U.S. the capability to wipe out Russia and China in a first strike, a policy which Obama has continued. Nuland so impressed Cheney he installed her as U.S. Ambassador to NATO from 2005-2008, itself a deliberate provocation to Russia.

Under Obama, Nuland is continuing to pursue the agenda Cheney advocated in 1992 when he was Secretary of Defence in a memo called the Draft Planning Guidance, which stated, “Our strategy must now refocus on precluding the emergence of any potential future global competitor.” (At the time, then Senator and now Vice President Joe Biden denounced Cheney’s memo as “a plan for literally a Pax Americana, an American empire”.) Nuland’s husband, Robert Kagan, was a co-founder in 1997 of the Project for the New American Century, the neo-conservative think tank that wrote the blueprint for Bush and Cheney’s pre-emptive war and regime change strategy in 2000, before 9/11 provided the pretext.

Nazis in the cabinet

Victoria Nuland has now directed in Ukraine a neo-Nazi coup against the democratically-elected government, and installed an interim government in which neo-Nazis from the Svoboda party occupy eight of the 15 position in the interim cabinet. Svoboda means Freedom, but before its recent name change it was the Socialist-Nationalist Party. The party is an adjunct of the Organisation of Ukrainian Nationalists (OUN-B) which hero-worships the WWII Ukrainian collaborator of Hitler’s occupying army, Stepan Bandera, whose forces murdered 70,000 Jews and Poles in 1943.

[Click here to view a 24 February press conference by Ukrainian political leader Dr Natalia Vitrenko featuring raw footage of the neo-Nazi guerrillas in Kiev brandishing Nazi symbols and portraits of Bandera as they conducted their violent overthrow of the government. The entire video lasts 50 minutes, but for those pressed for time the raw footage can been viewed at time intervals 20.08-24.20, 24.35-28.55, and 30.40-35.15.]

The following sequence of events in Ukraine illustrates Nuland’s role:

On the weekend of 22-23 February Nuland’s plans fell into place. A day earlier the Ukrainian president had signed an agreement with the opposition to reform the constitution to divest his powers, and go to early elections. This agreement was overseen and endorsed by the foreign ministers of three EU member states, and a Russian envoy. However, it broke apart when the Kiev protests erupted in deadly violence over the weekend, in which mysterious snipers killed more than 100 police and protestors. These deaths were blamed on the president, who fled Ukraine in fear of his life. On 5 March, Nuland’s EU counterpart, British baroness Catherine Ashton, with whom Nuland works closely, was exposed in a leaked phone call with the Estonian foreign minister acknowledging that it is now known that the snipers responsible for the killings were from one side, that of the neo-Nazi-dominated protestors, but Nuland’s new regime is refusing to investigate the killings. Witnesses present identify the killer snipers as having been commanded by Andriy Parubiy, who now heads the interim Ukraine government’s National Security and Defence Council.

Parubiy is a co-founder of Svoboda, and also of the armed neo-Nazi street guerrillas called Right Sector. Under Nuland’s interim government elements of Right Sector have been incorporated into the Internal Affairs ministry, and patrol the streets of Kiev bearing Nazi and SS symbols from WWII, enforcing order. Its leader Dmytro Yarosh, a declared candidate for the May presidential election, is not just a neo-Nazi, but he is also a jihadist terrorist, who fought in the 1990s with Islamists in Chechnya against Russia. Since the coup Yarosh has called on the Chechens to seize the opportunity of the Ukraine crisis to launch a new wave of terrorism against Russia.

Australia must strenuously denounce the British-Cheney-Obama policy of sponsoring and directing violent fascism and terrorism to overthrow Ukraine’s democratically-elected government and provoke a thermonuclear showdown with Russia, which is a deadly threat to all of humanity.

How close the world now stands to that thermonuclear showdown was brought home in a Reuters wire of 17 March: “A Kremlin-backed journalist issued a stark warning to the United States about Moscow’s nuclear capabilities on Sunday as the White House threatened sanctions over Crimea’s referendum on union with Russia. ‘Russia is the only country in the world that is realistically capable of turning the United States into radioactive ash,’ television presenter Dmitry Kiselyov said on his weekly current affairs show. Behind him was a backdrop of a mushroom cloud following a nuclear blast.”

What you can do:
Call or email Australian Foreign Minister Julie Bishop to demand that Australia object to our Anglo-American allies over their instigation of the Ukraine crisis, and sponsorship of neo-Nazis. Phone: 02 6277 7500, Email: foreign.minister@dfat.gov.au