A US grand jury has re-indicted an Indian diplomat whose arrest strained US-India relations. 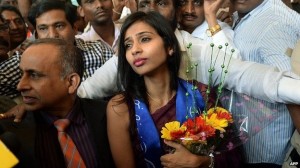 Devyani Khobragade is accused of visa fraud and underpaying her housekeeper, lawyers in New York said.

It comes two days after a US judge threw out virtually identical charges on the grounds that Ms Khobragade had diplomatic immunity.

She has always denied any wrongdoing. India was “disappointed” by the decision, a government spokesman said.

“Any measures consequent to this decision in the US will unfortunately impact upon efforts on both sides to build the India-US strategic partnership, to which both sides are committed,” said Syed Akbaruddin, according to the AFP news agency.

Ms Khobragade was detained in New York in December on suspicion of visa fraud and making false statements, after being accused of paying her Indian maid below the US minimum wage.

The Indian government said at the time it was “shocked and appalled” at the manner of her arrest, and ordered a series of diplomatic reprisals against the US, including the withdrawal of a US diplomat from India.

Ms Khobragade returned to India in January after she was indicted on criminal charges and India refused to waive her immunity.

After the charges were dropped, she said through her lawyer that she felt the rule of law had prevailed.

Her father, Uttam Khobragade, said at the time: “This is the happiest moment of our lives.”