Today, the People of Pakistan are on the crossroad and the world is watching them which way they proved themselves – A Divided People or a United Nation. 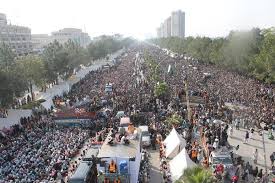 International Community expects from the people of Pakistan to demonstrate now whether they genuinely want to change the system for which they have been crying for decades. The World is watching whether the people of Pakistan truly want to eliminate the thug culture of politics and mafia-style political elite. The people in the civilised world, when meeting with overseas Pakistanis, are asking them whether Pakistanis now behind those hundreds and thousands of Pakistanis who have put-up their lives at risk spending their days & nights on the streets of the Capital (Islamabad) and ready to die just for Change in the Governing System.

This is the defining movements for the people of Pakistan, whether they still want to stick to the same incompetent parties and their leaders who have been in the political games for the last 3 or 4 decades and may be more and with those who ruled the country multiple times but delivered nothing to the country nor the people except blames, excuses, divisions, broken promises, deceptions and lies and corrupt the entire system from top to bottom.

What is the benefit to those children, men & women, young and old who for many days now waiting without any shelter for the final call from Imran Khan or Allama Tahir-ul-Qadri to burst out on the parliament, prime minister and president palaces. Why these people left their homes, travelled from their towns and cities on the call of Dr. Qadri and Mr. Khan? This is what millions of Pakistanis who are watching them on their television sets need to ask themselves at this moment. Are these followers of Dr. Qadri and Mr. Khan are crazy enough put their lives in danger?  I don’t think so but what I feel is that they understood clearly that if not now then never! These followers of Pakistan Awami Tehreek and Pakistan Tehreek-e-Insaf and other patriotic decided to offer themselves for the change with the hope that others will follow them.

This is not unusual among the nations who changed themselves for their shining future. African American stood up against victimisations & sufferings; Chinese stood up for the change of their fate; French stood up against social & political turmoil; Indian stood up against oppressions by Englishmen; Iranians came out on the call of Imam Khomeini for Islamic Revolution, and they all are better and respected nations today. Pakistanis should learn from others. The political parties and leaders and their children who have been in power politics directly or indirectly for the last many decades in Pakistan have done nothing except changed their own destinies. This is the time for common people to decide whether they will continue to serve the vested interest of the parties and leaders they are recklessly following or this is the time to change this ignorant attitude and join the hands of those who have already taken initiatives and ready for final showdown in the capital.

Why don’t people of Pakistan see that since Dr. Tahir ul Qadri and Mr. Imran Khan brought people on the streets of Islamabad, all these so-called ‘major political parties’ who behaved as rivals to each other are now actively preaching the lesson of national unity, compromise, sacrifice, give & take and so on now offering proposals of resign of one of the Sharif brothers, sharing in governments and so on; all these talks just reflect that how frantic they are to save this corrupt system which suits them. The fact of the matter is that these are their dirty ways & means of protecting their vested interest. They never been sincere with the basic issues of the people of Pakistan. They even could not provide pure drinking water, electricity, gas, health, education, and safety of the people in the last 60 years. They are ruling from an ordinary police station to the capital of Pakistan, they all have their common interests to save each therefore they will never ever be sincere on the demands of Dr. Tahir-ul-Qadri and Mr. Imran Khan.

Dr. Tahir-ul-Qadri never said that he did not accept the constitution of Pakistan what he has been saying that he wants to see the true implementation of the constitution and its each and every legislation, similarly, Imran Khan wants fair and clean electoral process and re-election, if Altaf Hussain or Asif Ali Zardar also want to see the supremacy of rule, law & order and fair and clear electoral system then why don’t they just join Dr. Qadri and Imran Khan keeping their ego and political differences aside for the sake of Pakistan and its nation?  The fact of the matter is that these demands will never ever be suited to parties of status quo. And the entire Pakistani nation has to understand beyond their current affiliations with them.

Certainly, no any political party or leader has ever sincerely done anything for Pakistan and its nation and no one can give any guarantee that Dr. Tahir ul Qadri or Mr. Imran Khan would change the fate of the people of Pakistan. Yet, one fact is remain there, that these two political leaders and their parties have never been in power whereas others enjoyed multiple times, therefore, let’s try them.