Two killed in Buddhist-Muslim riots following an internet rumour that a Buddhist girl was raped by a Muslim man.

Two people have been killed during clashes between Buddhists and Muslims in Myanmar’s second-largest city of Mandalay, police said. 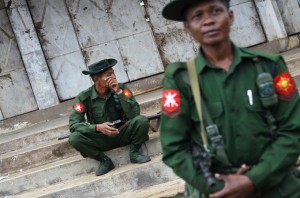 Police imposed an overnight curfew on Thursday after angry mobs rampaged through Mandalay for a second straight night leaving a Muslim and a Budhist man dead.

The reported deaths came a day after reports of five people being injured during secratarian clashes.

“One policeman, three Buddhists and one Muslim were injured by stones in the incident,” Mandalay police said in a statement late on Tuesday.

“Two of the three injured Buddhist men are receiving treatment in Mandalay hospital and the rest got treatment as outpatients.” the statement said.

A witness who lives in the mostly Muslim neighbourhood said a Buddhist mob had gathered late on Tuesday after rumours spread that the Muslim owner of a tea shop had raped a Buddhist woman.

No evidence of such an attack was immediately available.

Police stood between the groups and tried to drive the Buddhists away, the witness said.

He said the Buddhist mob ransacked shops and burned vehicles before police managed to restore order, but that at 6 am local time Buddhists were still driving through the neighbourhood shouting at residents.

Police fired rubber bullets to disperse the angry crowds that were facing off in the streets.

A local journalist told Al Jazeera that several Muslim shops were destroyed and that some people had been wounded in knife attacks. The main market in town remained closed on Wednesday.

In a radio address on Thursday, President Thein Sein raised the country’s need for stability as it transitions to democracy from a half-century of military rule, but did not mention Mandalay specifically.

“For reforms to be successful, I would like to urge all to avoid instigation and behavior that incites hatred in our fellow citizens,” Sein said.

Myanmar has been wracked by violence between the two communities since June 2012. More than 200 people have been killed and at least 140,000 displaced. Most of the victims have been Muslim.