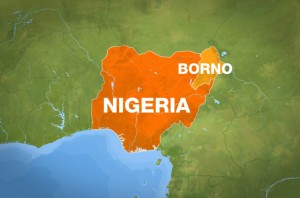 Boko Haram, which roughly means “Western education is forbidden”, is an armed group that is fighting to form an Islamic state in northern Nigeria.

A government local official who requested anonymity said civilians who did not surrender to the fighters were killed.

“They killed many people. Women and children fled into the bush,” he said.

Residents of Damboa told AP they were “piling up corpses” after the attack.

Nigeria’s Defence Ministry said it had repelled the fighters and killed at least 50 of them.

The army also incurred losses with at least six soldiers killed in the clashes, the ministry said.

Damboa has been besieged for two weeks, since Boko Haram fighters attacked a new tank battalion base set up on its outskirts on July 4.

The town sits on the main road south from Maiduguri, the Borno state capital.

The military was not immediately available to comment on the attack.

Fighters previously attacked a police station and an army camp in Damboa on July 6, chasing the security forces out of the town, which has been one of the hardest-hit areas during Boko Haram’s five-year uprising.

Damboa residents have been left unguarded since the previous attack, the official and witnesses said.

The northeast of Nigeria is plagued by Boko Haram attacks and has been under a state of emergency since May 2013.

Nigeria has been battling Boko Haram for years without success, and has had to seek assistance from world powers such as the US, France, Britain and China to free the estimated 200 school girls abducted by the group in April 2014.

Thousands of people have been killed in Nigeria’s insurgency, more than 2,000 so far just this year, and an estimated 750,000 Nigerians have been driven from their homes.