Passenger train on its way to Moldova collides with freight train, killing at least four people.

A passenger train on its way to Moldova has collided with a freight train near Moscow, killing at least four people and injuring many others, a spokeswoman for Russia’s Emergencies Ministry s 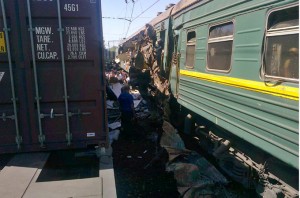 Police said two of the passenger train’s carriages had overturned after the collision on Tuesday.

The reason for the collision, near the
town of Naro-Fominsk, 55km southwest of Moscow, was not immediately clear, the Reuters news agency reported.

Russian news agencies quoted officials as saying between 11 and 45 people had been injured. Five of the injured were in serious condition, the AFP news agency reported, citing a local official who spoke to RIA-Novosti.

“One of the carriages of the passenger train was crushed by the freight train wagons. Rescuers are working to pull out injured people being crushed by the wagon,” he said.

Russian Railways said in a statement that 16 wagons of the freight train had derailed, damaging at least two carriages of the passenger train.