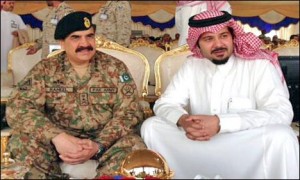 The military experts and chiefs of army staff of Gulf States were also present in the concluding ceremony of the exercises.