Citigroup Inc reported a better-than-expected quarterly net profit as a smaller loss on its troubled assets made up for weakness in its core trading and lending businesses, pushing up the bank’s shares in premarket trading. 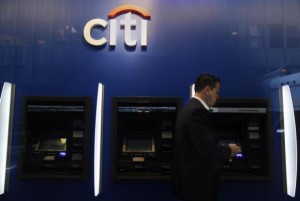 Analysts on average had expected adjusted earnings of $1.14 per share, according to Thomson Reuters I/B/E/S.

Citigroup shares were up 3.6 percent at $47.32 in trading before the bell, clawing back some of the 9 percent loss since the Federal Reserve rejected its capital plans on March 26.

The adjusted loss at Citi Holdings, which holds the bank’s portfolio of troubled assets left over from the financial crisis, eased to $292 million from $798 million a year earlier.

That helped to make up for a drop in profit and revenue in the company’s core business, known as Citicorp. Citicorp’s net income fell 8 percent and revenue fell 5 percent due to a decline in revenue from bond trading and home mortgage lending.

The results were also hit by higher legal costs. During the quarter, Citigroup said it was investigating a $400 million loan fraud in its Mexican subsidiary.

Until now, Citigroup has had only disappointing news for investors in recent months, notably its failure to win Fed approval to pay a higher dividend and return $6.4 billion of capital to shareholders through stock buybacks.

The results also contained good news for Chief Executive Mike Corbat, who has been struggling to live up to the expectations set when he was appointed in October 2012 that Citigroup would raise its profitability to industry standards and improve its relationships with regulators.

“We reduced our deferred tax assets more than any other quarter since the crisis and drove Citi Holdings closer to break even,” he said in a statement.

For all of Citigroup, adjusted revenue dropped 2 percent to $20.12 billion, but this beat the average estimate of $19.37 billion. Operating expenses slipped 1 percent to $12.15 billion.

The capital plan rejection wrecked what was left of Citigroup’s chances of meeting a key profitability target that Corbat announced a year ago – a 2015 profit equal to at least 10 percent of a measure of the bank’s common equity.

That ratio – known as return on tangible common equity – is a measure of how effectively the bank uses shareholders’ money to generate income.

“We are committed to bringing our capital planning process to the highest possible standards, befitting an institution of our global reach. I will dedicate whatever resources and make whatever changes necessary to achieve this critical goal,” Corbat said.

Citigroup’s two previous quarterly reports missed market estimates, adding to the pressure on the bank’s executives to deliver on Monday.

Bank of America Corp will report quarterly results on Wednesday, while Goldman Sachs Group Inc and Morgan Stanley will report on Thursday.

In fixed-income markets, adjusted revenue fell 18 percent to $3.85 billion from a year earlier as clients took the sidelines to await more clarity from the Fed on interest rates.

Investors are trying to gauge how much of the decline in fixed income business is temporary, and how much is permanent because of new and tighter rules being imposed by regulators to protect the financial system,

For its adjusted results, Citigroup strips out tax changes and the impact of changes in value of its debt and in the creditworthiness of its derivatives.

Expenses for job cuts and other costs the company says it incurred to reposition its businesses rose to $211 million from $148 million a year earlier.

Ahead of Monday’s report, analysts had said Citigroup would likely have to spend more on legal and compliance matters because of the rejection of the capital plan and multiple problems at its Mexican subsidiary, Banamex.

Citigroup revealed on February 28 that it had found a $400 million loan fraud in loans made by Banamex to a supplier to the national oil company, Pemex.

The bank also disclosed on March 3 that it also faced a criminal investigation into possible violations of anti-money laundering laws at California-based Banamex USA.

Citigroup has long considered its big operations in emerging markets as it greatest advantage over other big U.S. banks, and Banamex is its biggest operation outside the United States.

The Wall Street Journal, citing a person familiar with the matter, reported on Monday that Citigroup had cut another 200 to 300 jobs, or about 2 percent of its global markets workforce, citing market conditions.