Ceremony is the first since Beijing earlier this year declared September 3 as national day to mark 1945 defeat of Japan.

Chinese President Xi Jinping and all of the top officials in his government have made a rare joint appearance to mark 69 years since Japan’s surrender at the end of World War II. 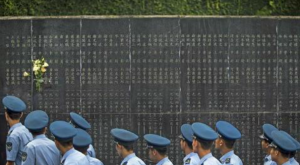 The ceremony on Wednesday was the first since Beijing earlier this year declared September 3 as a national day to mark Japan’s defeat.

It comes as relations between the two countries continue to sour over territorial and historical disputes.

Hundreds of veterans, officials, military personnel, schoolchildren, and young people in traditional ethnic minority dress gathered at a museum near the Marco Polo Bridge on the edge of Beijing, where a skirmish between Chinese and Japanese troops in 1937 triggered a full-scale war.

Opening the ceremony, Premier Li Keqiang called on the crowd to “pay a silent tribute to martyrs who bravely sacrificed their lives in the War of Chinese People’s Resistance Against Japanese Aggression,” as the conflict is known in China.

Xi and his six colleagues in the ruling party’s top committee paid tribute before sculptures of “martyrs” inside the museum.

Reporter from Beijing, said that in the past the event had been a low-key ceremony.

On Wednesday, Abe sought to repair some of the frayed diplomatic relations, picking two veteran members of parliament with friendly ties to China for top leadership posts in his Liberal Democratic Party.

In Tokyo, Abe’s spokesman also called on China to “look forward” and not back.

“We maintain our position on the history issues including those over World War Two,” Chief Cabinet Secretary Yoshihide Suga said in a scheduled news conference.

“The steps we’ve made so far as a peaceful country are highly recognised by the international community.”

China’s Communist Party has long used nationalism as part of its claim to a right to rule.

It stresses that under its leadership, which began in 1949, China finally overcame more than a century of humiliation by outside powers dating back to the Opium Wars of the 19th century.

The most frequent references to national humiliations are to Japan, which invaded China in the 1930s and surrendered in 1945.

Beijing researchers estimate that 20.6 million people died as a result.

The two countries’ relations are heavily coloured by their history, and Beijing and Tokyo are embroiled in a series of rows, including a long-running diplomatic spat over disputed islands in the East China Sea.

Chinese officials often call on Japan to “reflect” on its past, while Tokyo regularly invokes the need to develop a “forward-looking” relationship with Beijing.

China and Japan are now linked by billions of dollars in trade, investment and aid, but tensions have risen as both nations build up their militaries and accuse each other of growing assertiveness, including in the disputes over the islands, known as Diaoyu in China and Senkaku in Japan.