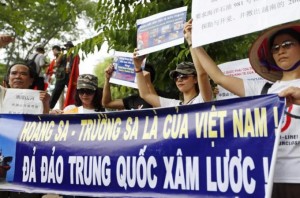 China has evacuated more than 3,000 of its nationals from Vietnam after a wave of unrest in the Southeast Asian country following China’s deployment of an oil rig in contested waters.

The violence in industrial parks has heightened tensions between the neighbours over sovereignty in the South China Sea.

Vietnamese authorities followed up a warning they would “resolutely” prevent any further outbursts by breaking up small protests in two cities on Sunday.

Vietnam’s communist rulers also flooded major cities with police to avert Sunday’s planned anti-Chinese protests as they stuck to their pledge to thwart any repeat of last week’s violence in three provinces in the south and centre.

Worker demonstrations spread to 22 of Vietnam’s 63 provinces, according to the Vietnamese government, with angry mobs burning down foreign-owned factories.

Several arrests were made on Sunday in the capital Hanoi and commercial hub Ho Chi Minh City within minutes of groups trying to start protests, according to witnesses.

In Hanoi, authorities closed off streets and a park close to the Chinese embassy and pushed journalists and protesters away.

Police were posted outside well-known dissidents houses, preventing them from leaving, according to activists.

In a related development, China has sent the first of five ships to speed up the evacuation of its citizens.

The Chinese government is also arranging for a chartered plane and vessel to evacuate the staff of China 19th Metallurgical Corporation, a contractor of one of the plants badly hit by the recent violence, Xinhua, the state-run news agency, said.

“Recently, there was an explosion of violence in South Vietnam targeting foreign companies, provoking injuries and death of Chinese citizens and damaging companies’ properties,” China’s Foreign Ministry said in a statement in Chinese on its website on Saturday.

“The Foreign Ministry advises Chinese nationals temporarily not to travel to Vietnam. [It also advises] Chinese citizens and structures in Vietnam to increase their risk-awareness, to strengthen their security prevention measures, and to avoid leaving [their premises].”

Earlier on Saturday, Xinhua reported that Guo Shengkun, the security chief, had spoken to his Vietnamese counterpart and urged the authorities there to quell the violence.