HONG KONG: Twelve crew members from a Chinese cargo ship are missing after it collided with a container vessel and sank just outside Hong Kong waters on Monday, authorities said. 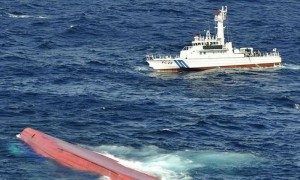 “There are 12 people missing,” a fire department spokesman told AFP, adding the vessels collided in the early hours of the morning near Po Toi Island which lies on the southern edge of Hong Kong waters.

“Two cargo ships collided and one of them sank,” a police spokeswoman told AFP.