A respiratory virus that has killed dozens of people, mainly in the Middle East, is widespread in camels and may be jumping directly from camels to humans 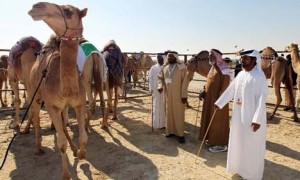 Middle East Respiratory Syndrome, or MERS, it has killed 79 of the 182 people infected since September 2012, according to the World Health Organization.

Until now, little was known about its source or how it could be infecting people.

But senior study author Ian Lipkin of Columbia University said research now shows the virus is “extraordinarily common” in camels and has been for at least 20 years.

“In some parts of Saudi Arabia, two-thirds of young animals have infectious virus in their respiratory tracts,” he told AFP.

“It is plausible that camels could be a major source of infection for humans.”

Lipkin worked with colleagues at the US National Institute of Allergy and Infectious Diseases and lead author Abdulaziz Alagaili of King Saud University in Riyadh on the study, which was published in the journal mBio on February 25.

Researchers took blood samples as well as rectal and nasal swabs from more than 200 camels in Saudi Arabia in November and December of 2013.

They analyzed the samples using mobile laboratory technology and found antibodies for MERS as well as active virus, particularly in the nasal secretions of younger camels.

The team also analyzed archives of blood samples from dromedary camels — the most common species — taken from 1992 to 2010, and found evidence of MERS going back two decades.

If confirmed, MERS would not be the only disease known to pass from camels to humans, but such cases are rare. One other is Rift Valley fever, which can cause fever and flu-like symptoms in people.

Camels that tested positive for the virus appeared to be in otherwise good health.

Most of the human infections of MERS have been in Saudi Arabia, with others scattered across Jordan, Qatar, Tunisia, and the United Arab Emirates.

Some cases have also been reported in France, Germany, Italy and Britain, but all have had some links to travel in the Middle East.

Researchers now think close contact with camels, which are known to be slobbery creatures, could be how the virus is transmitted.

“People race them, people keep them as pets,” said Lipkin.

“And they also eat camels, so there are many opportunities for exchange of material between camels and people.”

Researchers are investigating a potential vaccine for camels and are still searching for a treatment for humans who become infected.