KANDAHAR: Two roadside bombings, minutes apart, killed an Afghan policeman and wounded four others in the southern city of Kandahar on Thursday, an Afghan officer said. 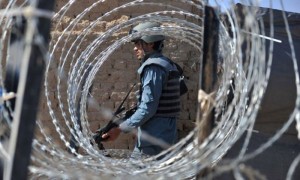 Officer Shamsullha, who like many Afghans goes by only one name, said the first explosion struck a police car as it drove down a street in Kandahar city in the morning hours, killing one officer and wounding two.

As other policemen who were nearby rushed to the site of the blast, a second explosion went off, wounding two policemen, said Shamsullha.

No one immediately claimed responsibility for the attack.

The Taliban have launched their annual spring offensive, promising to step up attacks against Afghan security forces in a bid to undermine the Western-backed government as foreign combat troops prepare to withdraw from the country by the end of the year.

Also on Thursday, the international coalition said one of its service members died in a helicopter crash in southern Afghanistan the day before.

The cause of Wednesday’s crash was not immediately known and the Nato statement did not provide other details.

Coalition policy is for home countries to identify their military dead.

But an Afghan police officer, Atta Mohammad, said the crash occurred in Kandahar province’s Maruf district around midnight on Wednesday.

Along with the Nato soldier killed, 15 coalition service members were also hurt in the crash, he added.