At least 10 people have been killed when twin bombings struck a town northeast of the Iraqi capital city of Baghdad, a day before the country’s parliamentary elections. 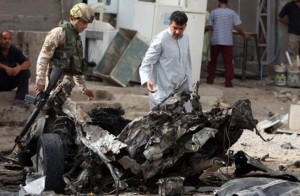 Security and medical officials said that the blasts took place at a market in the town of Saadiyah on Tuesday.

The bloodshed comes as people across the Arab country are set to go to the polls on Wednesday.

A spate of terrorist attacks left nearly 60 people dead in Baghdad as well as north and west of the capital on Monday.

The deadliest incident occurred in the Kurdish populated town of Khanaqin where 30 people were killed and 50 others injured after a bombing targeted a political gathering.

Iraqi soldiers and policemen began voting on Monday in order to be able to provide security for the main polling event on April 30.

Wednesday’s vote is Iraq’s first parliamentary elections since U.S. forces withdrew in 2011 and is a major test for the security forces. Prime Minister Nouri al-Maliki is hoping to win a third term.

Meanwhile, the Islamic State of Iraq and the Levant (ISIL), are reportedly coming to Iraq from neighboring Syria and Saudi Arabia to undermine security in the country.

The government in Baghdad has blamed Riyadh for the chaos in Iraq, saying Saudi Arabia is funding and arming militants fighting against Iraqi forces in the country’s western areas, including Anbar province.

Violence has killed nearly 3,000 people in Iraq so far this year, according to AFP figures based on security and medical sources.