Boeing’s total revenues rose 8% to $20.5bn in the first quarter, driven by an increase in commercial aircraft deliveries. 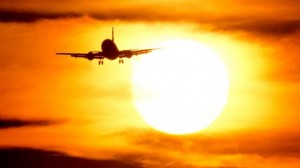 The company delivered 161 commercial aeroplanes in the three months to 31 March, a rise of 18% compared with the first quarter last year.

However, Boeing’s revenues from military aircraft and space systems fell 6% to $7.3bn.

Net profit in the first quarter of $965m was 12.7% lower compared with the same period a year earlier, but better than most analysts expected.

The aerospace firm also raised its profit forecast for 2014.

The increase in Boeing’s first quarter deliveries was flattered by the fact the aircraft manufacturer delivered just one 787 Dreamliner in the first three months of last year.

Deliveries were halted after two incidents in which batteries on the planes burned, prompting regulators to ground the global Dreamliner fleet.

In total, Boeing delivered 137 commercial planes in the first quarter of last year.