ABUJA: Police say an explosion that ripped through a busy bus station in Nigeria’s capital has killed at least 71 people and wounded 124. 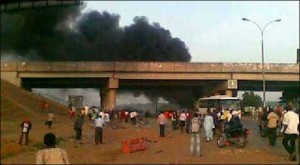 There was only believed to be one blast with secondary explosions as vehicle fuel tanks ignited and burned.

There was no immediate claim for the rush-hour blast, though the Boko Haram terrorist network has been threatening to attack the capital.

The extremists, based in northeast Nigeria, carried out a 2011 suicide car bombing at the United Nations office building in Abuja that killed at least 21 people and wounded 60.