ARKANSAS – Once again, hundred of dead blackbirds are falling from the Arkansas sky – two years in a row. 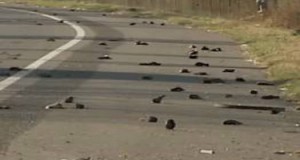 The town of Beebe, Arkansas has seen this before, and citizens are wondering why this is happening to them again.  Well, it’s not just them this time.  Blackbirds are dropping all across Arkansas.

ABC Arkansas affiliate KATV reported that a radar image showed a large mass over Beebe a few hours before midnight on New Year’s Eve. Then the birds began falling from the sky, just like last year.  Similar reports came from across Arkansas.

“It’s definitely the work of the Gootans,” Begley said.   “We’d  like to think that it is just something they are doing for some ritualistic reason, but the truth is we think it is once again signaling citizens of earth that there will be a full-on ground attack sometime this year.”

The U.N. confirmed that three gigantic spaceships landed on earth on November 27, 2011 – two landed in a remote southern area of China, and one landed in the Indonesian sea.  Since that time, the U.N. has estimated that over 10,000 aliens from Planet Gootan have spread out across the planet – though the number could be much higher.

What do the Gootans plan to do here on Earth?

“We are not sure, but the Gootans have a history of being hostile.  They also do not  attack in conventional ways that citizens of Earth are use to.  We won’t see them coming,” said Dr. Begley.  ”These dead blackbirds are very troubling.”

Emily Nichols, a police dispatcher in Beebe, told ABC Radio that she received hundreds of calls. “Just that blackbirds are falling again and that they found black birds on their streets where they live or at churches,” Nichols said.

Animal Care and Control in the state of Arkansas was overwhelmed. “We couldn’t keep up with the calls.  It was total blackbird devastation out there,”  Lloyd Marband of Little Rock Police told WWN.  ”I’d say there are over 15,000 dead blackbirds across Arkansas.  Not a good way to start the year.”

“There was just birds falling down everywhere on the street and people dodging and missing them,” said Ronnie Taylor a citizen of Hope, Arkansas. “My boy, Ted, was out there trying to pick them up, and got hit by five dead ones.  It was scary.”

The Arksasa Game and Fish Department took about 300 100 birds for testing to try to determine what happened.  The U.N. Panel took over 1,000 birds back to the Alien Research Facilities in Quantico, Virginia.