Benfica claimed their 33rd Liga title on Sunday night with a 2-0 win over Olhanense at the Estadio da Luz. 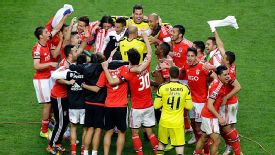 Lima scored in the 57th and 60th minutes to secure the capital club’s first title since 2010 with two games to spare.

Jorge Jesus’ men lost their first league game of the season 2-1 away at Maritimo but have not been beaten since and romped to the championship on the back of 11 straight wins.

They now have a quadruple in their sights with a Portuguese Cup final against Rio Ave to come along with semi-finals in the Europa League against Juventus and the Portuguese League Cup against Porto.