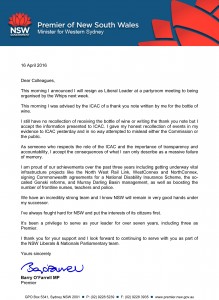 This morning I announced I will resign as Liberal Leader at a partyroom meeting to being organised by the Whips next week.
This morning I was advised by the ICAC of a thank you note written by me for the bottle of wine.

I still have no recollection of receiving the bottle of wine or writing the thank you note but I accept the information presented to ICAC. I gave my honest recollection of events in my evidence to ICAC yesterday and in no way attempted to mislead either the Commission or the public.

As someone who respects the role of the ICAC and the importance of transparency and accountability, I accept the consequences of what I can only describe as a massive failure of memory.

I am proud of our achievements over the past three years including getting underway vital infrastructure projects like the North West Rail Link, WestConnex and NorthConnex, signing Commonwealth agreements for a National Disability Insurance Scheme, the so-called Gonski reforms, and Murray Darling Basin management, as well as boosting the number of frontline nurses, teachers and police.

We have an incredibly strong team and I know NSW will remain in very good hands under my successor.

I’ve always fought hard for NSW and put the interests of its citizens first.

It’s been a privilege to serve as your leader for over seven years, including three as Premier.

I thank you for your support and I look forward to continuing to serve with you as part of the NSW Liberals & Nationals Parliamentary team.
Yours sincerely