Sterling, Gerrard, Moreno on the score-sheet at White Hart Lane, while Aston Villa seal a close win over Hull. 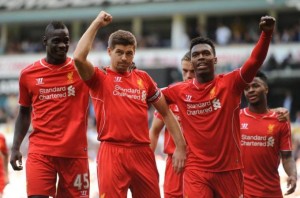 Raheem Sterling, Steven Gerrard and Alberto Moreno were on target as Liverpool bounced back from defeat by champions Manchester City with a classy performance in manager Brendan Rodgers’s 100th game in charge.

Enigmatic striker Mario Balotelli made amends for his wasteful finishing on his Liverpool debut with his impressive all round performance and positive work ethic.

Gabriel Agbonlahor and Andreas Weimann scored as Aston Villa maintained their unbeaten start to the season with a 2-1 victory against Hull City at Villa Park.