Bahrain’s Interior Ministry criticized a U.S. State Department report about the general situation in the country as “lacking neutrality and objectivity,” refuting a total of 42 U.S. claims in detail. Bahrain witnessed a series of public protests and demonstrations in 2011.

The U.S. claims were issued in the U.S. State Department’s 2013 Country Report on Human Rights, with Manama contesting a number of both general and specific claims by Washington regarding the situation in the country, particularly regarding alleged incidents of violence or unrest betwee 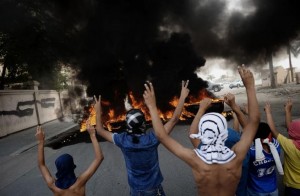 Washington claimed that 52 people were killed in incidents linked to unrest in 2011, with hundreds more being injured. Bahrain responded: “This is inaccurate. The BICI Report, accepted as the definitive record of the unrest, found that 35 deaths were linked to that incident from February through April 2011.”

As for claims that “dozens of deaths” were linked to Bahraini security forces’ actions, either directly or indirectly, the statement said: “The Ministry of Interior acknowledges that two people were killed during violent protests and clashes with police on the second anniversary of the unrest. An additional four violent opposition members killed themselves in 2013.”

“Three police officers were killed by rioters/terrorists. Homemade bombs were responsible for two of the deaths and one officer was killed when he was shot at close range by a rioter with a flare gun… Therefore, in 2013, more police officers died than rioters and more rioters died on account of their own actions than in clashes with the police,” it said.

The allegation that some deaths were caused by exposure to tear gas is “utterly baseless,” the statement added.

“The allegation that police continued to serve as law enforcement officers while their trial was underway is misleading and raises unnecessary alarm. The officers were assigned to non-enforcement, administrative duties during their trial, pending the final verdict. This is the same protocol that is used by police departments in the United States,” the report added.

“The mention of ‘official interrogation facilities’ (otherwise known as “police stations” in the United States) is gratuitous. The Ministry of Interior categorically rejects the allegations that torture and/or ill treatment is ongoing at police stations,” the report said.

“The Ministry of Interior has a zero-tolerance policy for torture or any other form of mistreatment,” the report added.