Karachi, august 25: Over a thousand vehicles, including cars, buses, taxis and rickshaws, were held up for nearly two hours on several roads mainly Rashid Minhas Road, Shahrah e Faisal which led to the airport and other main roads due to VIP movement on Monday. In the process, fuel ran out in some cars, an ambulance carrying a suffering patient got held up, and of course, a number of people could not keep their appointments, severals of us won’t be able to get their flights on time. 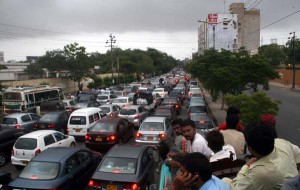 Many people who had their flights booked were stucked in traffic and none of them reached on time and miss their flights on the other hand air lines(s) shows very non professional, non cooperative and unfriendly attitude with their passengers even they closed their boarding counter before before time therefore passengers faces inconvenience and embarrassment.

Tribune International correspondent reported, A person named Syed Faisal Hasnain Zaidi who had his flight from Karachi to Bahrain was missed. As he told, ” I have a flight tonight but due to vip movements in city I was unable to reach on time when i reached the plane is just about to fly I talk to the ground authorities airline but they shows very unfriendly, uncooperative and rude attitude and they refused to help me”, He also mentioned the name of airline which Gulf air and his flight no GF-753. 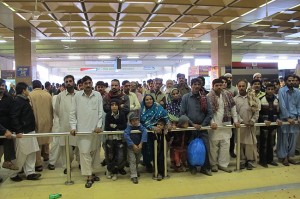 Whether the roads were closed for 20 minutes or two hours, the tragedy lies in the total unconcern for the welfare of the masses. Especially in Karachi, the citizens are just expected to complacently bear with every trauma and discomfort that is dished out to them because of lack of simple civic planning, be it a water and power issue, the electricity dilemma or the despicable mishandling of traffic. And because of the Karachiites’ ability to handle the toughest of living conditions, the managers and controllers of all civic institutions have become totally desensitised towards daily issues of inconvenience.

What will it take for officials to realise that safeguarding the citizens’ interests should be the primary concern for all government officials — be it the head of the country or the traffic controller. But the elitist and political mindset has warped the ‘job description’ of every official, whose only agenda has become to please the powerful and trample the public sentiment.

Adding insult to injury, it is now being considered to levy the road-user tax on all vehicle users. How fair is it for us to burn extra fuel while sitting in jams to accommodate VIP security? Road-user tax is directly levied on each litre of fuel purchased. With diversions obviously increasing the distance covered and subsequently the fuel consumed, our added expense will directly increase the federal coffers, in turn adding to our economic burdens as well as mental anguish.

So as a VVIP whisks across and we sit and burn extra fuel, money and mental energy, we are only left to wonder whether it was simply our fault to have been born in a city which gives us no civil right, whatsoever.