Australia will increase its support for reform and engagement with Myanmar, in recognition of the country’s progress towards democracy. 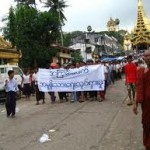 The Gillard Government today made several significant announcements in support of Myanmar and its people:

Australia’s commitment to expand its constructive engagement with Myanmar recognises the unprecedented process of change underway there towards political freedom and the new opportunity this brings to help promote the prosperity of Myanmar and its people.

As a close neighbour, Australia will benefit from a more open and prosperous Myanmar that is fully integrated into the region and able to share in the opportunities of the Asian Century.

Building on our already substantial commitment to Myanmar, Australia will provide an additional $20 million over two years for the first phase of the new Myanmar-Australia Partnership for Reform.

This program will help the Myanmar Government build capacity to deliver on its reform agenda – strengthening democratic institutions, promoting human rights, improving economic governance and advancing the rule of law.

The Partnership will include support for the Myanmar Human Rights Commission and will promote human rights accountability and provide training to government institutions and civil society.

The Partnership will also provide assistance for the development of a sustainable and equitable mining sector in Myanmar. Australia will support the Myanmar Government’s commitment to join the Extractive Industries Transparency Initiative and this year will host a visit by Myanmar ministers to share the experience of Australian mining experts.

The Partnership will help to maximise the impact of our existing aid program, which is set to double in size to $100 million per year by 2015. Our aid will focus on governance, providing essential health services, improving access to basic education, supporting the peace process, and improving the livelihoods of Myanmar’s rural poor.

In view of the significant reforms that have taken place in Myanmar, the Government will also lift some restrictions on defence engagement.

Our objective is to encourage the development of a modern, professional defence force in Myanmar that continues to support democratisation and reform.

The Government will therefore post a resident Defence Attaché to Myanmar to allow for greater engagement and dialogue with the Myanmar Defence Force.

The Government is also lifting restrictions on defence interactions in certain areas, including humanitarian and disaster relief activities and peacekeeping. Australia will maintain its arms embargo with Myanmar. Further moves towards a normalised bilateral defence relationship will be considered over time on a step-by-step basis.

Australia is committed to working with Myanmar to provide aid to those who are most in need.

We have recently provided a further $2.5 million in emergency aid to meet pressing humanitarian needs in Rakhine and Kachin States, which will also include preparation for mine removal in southeast Myanmar. This assistance complements the $5 million we have previously committed to support efforts to bring peace to Myanmar’s ethnic minority areas.

To ensure the benefits of Myanmar’s reforms are felt by all, Australia will facilitate increased trade and investment links between our two countries.

In 2013, Australia will establish a commercial presence in Myanmar’s business centre in Yangon headed by a resident Trade Commissioner – assisting Australian companies to do business and bringing important economic opportunities and skills to Myanmar.

Australia’s engagement with Myanmar has been made possible by the extraordinary process of change underway there and through the leadership of its people and government.

There are important challenges for Myanmar’s people and its government and Australia stands as a ready partner in this enterprise.