Airline seeks to reassure investors as it writes down $2.4bn for past year due to company restructuring.

Qantas Airways has reported its biggest financial loss so far, after writing $2.4bn off the value of its fleet due to a company restructure. 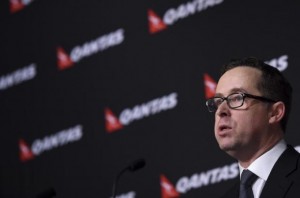 Thursday’s write-down gave the Australian carrier an unprecedented $2.6bn net loss for the year which ended June 30, compared with a restated net profit of $1.85m a year earlier.

Alan Joyce, Qantas chief executive, attempted to reassure investors that the worst may now be behind Australia’s national flag carrier, as a landmark change in Australian laws opened the door to significant foreign investment in the airline’s international arm.

“There is no doubt that today’s numbers are confronting. But they represent the year that has passed and we have now come through the worst,” said Joyce.

“With our accelerated Qantas transformation programme we are already emerging as a leaner more focused and sustainable Qantas Group.

“Our work is on track and we see accelerated benefits in the coming year.”

Despite the headline losses, shareholders reacted positively to the news that the company’s prospects may soon be improving.

Shares in the airline hit an 8.7 percent increase in mid-morning trade on Thursday at A$1.41, a three-month high and the biggest intraday gain in a year.

The airline unveiled a new holding structure that will divide its domestic and international arms, a separation made possible following the passing of changes to the Qantas Sale Act earlier this week, the carrier said.

Foreign and individual investors can now take a stake of up to 49 percent in the international arm.

That is a major change from the previous limits on ownership by individual investors of 25 percent and by foreign-owned airlines of 35 percent.

“Importantly, there’s a clear and significant easing of both international and domestic capacity which will stabilize the operating environment in which we are in.”

Despite an investor push for major asset sales, Qantas said it had no plans to spin off its profitable Frequent Flyer loyalty scheme, which analysts value at up to $2.3bn.

Qantas said a review of its loyalty programme had concluded there was “insufficient justification” for a partial sale, with the division continuing to offer major growth opportunities for the company.

However, it said it had identified other potential asset sales, including airport terminals, property and land holdings.