Sydney (Tribune International, Oct 21, 2014): Australian legend but the most controversial politician and a top former Prime Minister Gough Whitlam died at the age of 98. 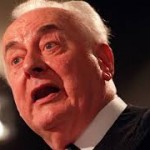 Late Gough Whitlam will be remembered as Australia’s top politician and great reformist leader of Australian Labor Party. He made great decision during his tenure as a Prime Minister. He showed the direction to Australian nation. He abolished national service, he pulled troops out of Vietnam, gave extra pay to women, established free higher educational courses, and gave basic rights to the native aborigines. Late Mr. Whitlam was the first Australian leader who established diplomatic relations with the China.

Late Gough Whitlam will also remembered as the most controversial politician yet a brave leader. In 1975, he was dramatically dismissed from the prime-ministership by the then Governor-General Sir John Kerr. He was the victim of a political scandals in 1975 which led the constitutional and he was then dismissed by the Governor General.

Late Gough Whitlam was a great speaker, prior to his dismissal, he said, when he took to the steps of what is now Old Parliament House and uttered the immortal line: ‘Well may we say God Save the Queen; because nothing will save the Governor-General.’,